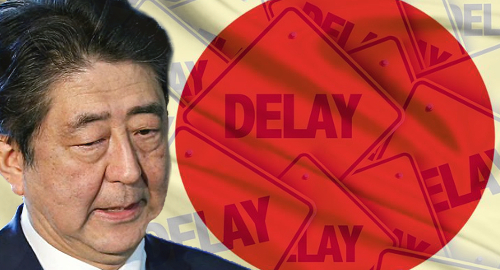 Japan’s casino launch timeline faces further delays after the government opted to postpone the formation of a new regulatory body for its proposed integrated resorts (IR).

On Wednesday, Japanese media reported that Prime Minister Shinzo Abe’s ruling Liberal Democratic Party (LDP) was backing off plans to create a new five-member casino management commission by July 1. The decision will likely delay the body’s formation until next year.

Abe (pictured) is reportedly skittish about putting the casino issue on the media’s front pages ahead of this July’s elections for the Diet’s (legislature’s) upper house. The subject remains hugely controversial with the general public, who fear the potential downsides to society of casinos.

The delay also applies to the government finalizing its ‘basic policy’ of IRs, which includes where the country’s maximum possible three IRs will be situated and the rules governing the casino licensing process.

Japan approved its casino implementation legislation last July, and the text required the establishment of the commission within 18 months and finalizing the basic policy within two years. Whenever it happens, the Diet will still be required to vet the commission’s chairman, directors and other staff, along with the regulator’s budget.

It’s hard to believe that at one point that it almost seemed possible that Japan’s casinos could open in time for next summer’s Olympic Games in Tokyo. The latest delay likely means that Osaka – which has staked out a claim as Japan’s most welcoming potential casino jurisdiction – won’t meet its goal of opening a gaming venue in time for the Osaka-Kansai World Expo in 2025.

Speaking at a press conference on Wednesday following word of the LDP’s delays, Osaka’s governor Hirofumi Yoshimura urged the national government to “don’t waste time playing games and get to it.” However, this is Japan, so he did use the word ‘please.’