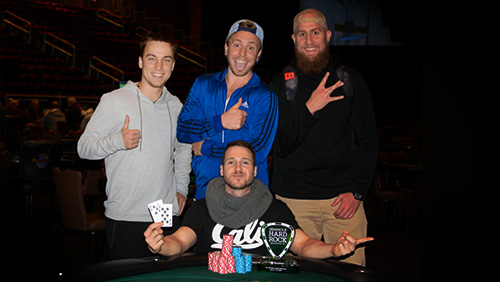 The 2019 Seminole Hard Rock Poker Showdown is underway and the excitement is already proving to be nonstop. Nick Ahmadi took down the opening event to pocket $210,000, but wasn’t the only one to pick up a six-figure payday. Elio Fox and Rich Alati have showed their poker prowess, as well, each taking down a major event.

Fox emerged victorious at the $50,000 Super High Roller (Singer Re-Entry) event, which only found 20 entrants. However, it was enough to cover the $1 million guarantee and Fox was at the top of the list of four to get paid. All of the finalists were common fixtures at high rollers and seeing their names on the list isn’t surprising.

Ali Imsirovic exited in fourth place, pocketing $120,000. Alex Foxen would go next with $180,000, followed by Sam Soverel with $260,000. Fox, who took down the same event at last year’s series, picked up a cool $440,000. He pulled it off after limping in with K-Q, to which Soverel came back over the top with pocket fives. Fox raised, forcing Soverel all in and the race was on. Soverel almost survived, but a King on the river gave Fox the win.

Fox said after his win, “It feels great. It’s always wonderful to start out a trip doing well – makes it easier the rest of the way… It was a really tough tournament, and I love playing with the group of guys that was here. I play with them a lot, and I’m really happy to have won.”

The $1,100 NLH Re-Entry event attracted 689 entrants, completely blowing away the $250,000 guarantee to create a prize pool worth $668,300. In the end, Alati found himself in a showdown against Sam Panzica with a chip lead of around three million. Alati and Panzica decided to cut a deal, with the latter taking home $100,836 and Alati getting $107,740 and the trophy.

Other names that made it to the cash include Ryan Olisar, who exited in third with $55,425, and Judy Miller with a fifth-place finish for $31,077. Kyle Carson was sent to the rail in seventh with $20,518 and Kurt Lichtman had busted two places earlier with $12,264 in his pocket.