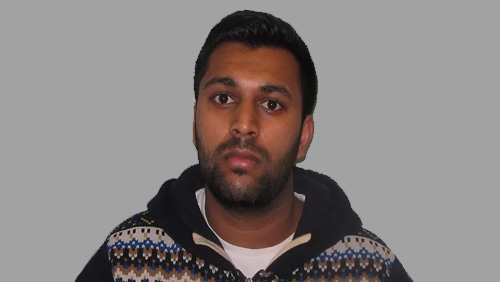 When a professional poker player wins a tournament, rarely do they keep all of the money. There’s no yellow tape around that truth. It’s as rare as a feeble firefighter that they don’t get to keep any of it – unless you’re Adam Lulat.

In 2015, the 27-year-old from Preston, England, was one of six people scarred for life after a pan-European investigation led by the HM Revenue and Customs (HMRC) discovered his role in a £40m VAT tax fraud.

A funny man wearing a wig in Manchester Crown Court sentenced Lulat to 28-months in prison and ordered him, and his five chums, to return £590,000. Given that Lulat was skint at the time, he only had to pay £1 – the difference between a whale and a tiddler.

After serving his time, Lulat decided to play a spot of poker and entered the £1,110 buy-in Grosvenor United Kingdom Poker Tour (GUKPT) Main Event in Manchester, and he beat 241-entrants to win the £68,930 first prize, only the HMRC caught wind of his victory and ordered him to hand it over or else go to jail without passing GO.

According to the Lancashire Post, Lulat has won another poker tournament, this time for £30,200, and once again the HMRC have pounced. During a Confiscation Hearing at Manchester Crown Court on Wednesday, a judge ordered him to hand it over or spend another 18-months behind bars.

“{Adam} Lulat may have hoped that his win would go under the table, but once again we had an ace up our sleeve, and it is HMRC cashing in his chips.” Said a chipper Debbie Porter, assistant director at the HMRC Fraud Investigation Service.

Lulat has earned $112,893 playing live tournaments, with his GUKPT Manchester score taking up the bulk of that haul. However, Hendon Mob has no records of Lulat winning anything beyond his 2018 GUKPT win.

One man who gets to keep 100% of his poker winnings is the former world boxing champion, David Haye, but he seems way, way off even cashing in a tournament.

Haye’s interest in poker first came to light when he partnered with Grosvenor Casino and fell under the tutelage of Jeff Kimber, Joe Beevers and Katie Swift in preparation for a run in the 2018 GUKPT Goliath in Coventry.

Haye never mounted a serious challenge in the largest live tournament held outside of Las Vegas, but the partnership didn’t end when he hit the rail. You don’t become a world champion without some grit and determination, and David v Goliath is back on for 2019.

As you can tell from this video, Swift, Kimber and Beevers have their hands full.

David is taking a jab at a new tactic…

Will this fish become a shark, or is he out of his depth? #DavidVsGoliath19 #WherePokerLives#ThursdayMotivation #ThursdayThoughts pic.twitter.com/huZjqkfEt8

The winner of the Goliath is guaranteed to bank £100k unless you are David Haye (unlikely), or Adam Lulat (HMRC-owned). ​

Convicted thief wins at poker, loses it all to the taxman
Erik Gibbs
16 August 2018
.