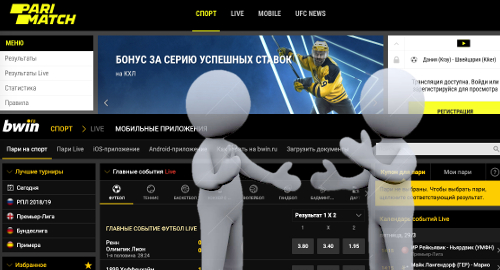 On Friday, Russian media outlet Kommersant reported that Digital Betting LLC, the Russian firm with which the UK-listed GVC launched the Bwin.ru joint venture in November 2017, was negotiating a tie-up with Cyprus-based Parimatch Holding, which operates in Russia via a licensing deal with Betring LLC.

Komersant claimed that Digital Betting was discussing similar possibilities with S8 Holding, the parent company of both Russian-licensed online bookmaker 888.ru (which has no affiliation with UK-licensed 888 Holdings) and the Stoloto lottery operation.

At the time of Bwin.ru’s launch, Sergeyev boasted that Mamut was prepared to invest €10m per year in marketing the site via Rambler’s media properties, a strategy Sergeyev claimed would allow Bwin to capture 10% of Russia’s licensed online betting market within three years. However, Bwin.ru ranked 12th out of 16 local licensees on Russia’s 2018 online traffic report.

It remains to be seen whether Bwin.ru’s shaky start will have any effect on other Western bookmakers’ interest in Russia’s regulated market. Recent reports have another major Western betting brand – strongly rumored to be UK-based Bet365 – prepping the launch of their own Russian joint venture any day now.

Earlier this week, Russia’s anti-censorship news hub Roskomsvoboda reported that Roskomnadzor had sent warning letters to 10 VPN firms, including NordVPN, ExpressVPN and Hide My Ass!, giving them all 30 days in which to connect their services to the Federal State Information System (FGIS) so that they don’t allow users to access sites in Vladimir Putin’s no-go zone.

Roskomsvoboda subsequently reported that the majority of the VPN firms had responded to Roskomnadzor’s threat with a stiff middle finger, with some companies vowing to shift any physical operations out of Russia to neighboring countries in order to ensure uninterrupted service for their customers. Only Kapersky Lab stated their willingness to comply with Russian law.

Russia has targeted other internet giants, including Google, for their reluctance to connect to the FGIS and its ever-expanding blacklist of forbidden fruit, including tens of thousands of off-limits online gambling domains.

Russia’s blacklisting efforts are notoriously ineffective at achieving their stated aims, but Roskomnadzor announced this week that it was getting closer to implementing its new deep packet inspection (DPI) system to monitor all internet traffic that dares cross the borders of Mother Russia.

While Roskomnadzor has yet to confirm or deny rumors, the new system will reportedly also involve throttling of certain web traffic to penalize operators who fail to adhere to Russian rules and thereby ‘encourage’ Russians to patronize preferred online options.