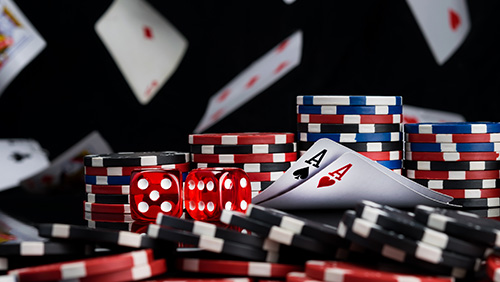 Justin Liberto has added a WPTDeepStacks Main Event to his impressive cache of trinkets, after beating a 371-entrant field in his hometown of Maryland.

At the turn of the year, Justin Liberto hopped on a jet plane heading for Melbourne and came back feeling tickety-boo after cashing nine times in the Aussie Millions, including picking up a ring in the AUD 1,200 No-Limit Hold’em Shot Clock Shootout.

He didn’t have to travel as far to win his second title of the year.

Liberto currently stands #8 in the Maryland All-Time Live Tournament Money List (a spot above a Phil Galfond, no less), and it was in his hometown that Liberto picked up another $116,363, inching him closer to Rhett Butler in #7.

Day 1 ran its course over two starting flights, and 70-players remained after all the check-raising, bluffing and folding. By the end of Day 3 only nine remained, and leading the way was Liberto.

It took 14-hands to lose the first player.

With blinds at 25k/50k/50k, Jon Cantor moved all-in from the hijack seat for 590,000, and Noah Shefrin also moved all-in from the small blind. Cantor tabled pocket nines, and they looked positively micro compared to the two kings lying in front of Shefrin. The community cards did little to help Cantor, and he hit the rail before anyone else.

The action limped into Level 28 before we lost another player, and once again it was Shefrin kicking arse.

With blinds at 30k/60k/60k, Shefrin opened the cutoff for 125,000; Matt Vaughan moved all-in for 1,430,000 in the big blind, and Shefrin tank-called. Once again it was pocket pair versus pocket pair, and once again Shefrin held the dominating hand, this time pocket eights crushing pocket sevens over the five card sprint.

Six hands later and we were 6-handed.

The WPT scribes missed the preflop action but arrived in time to see Feng Li checking out of the big blind on a Td7d2c flop. Justin Liberto bet 85,000 from late position, and Li called. The turn card was the Qd, Li checked, Liberto bet 190,000, and Li made the call. The final card to fly out of the deck was the 7c; Li checked, Liberto moved all-in, and Li tank-called showing AQ for a two pair hand. Liberto had deuces for a boat.

The third elimination of Level 28 happened during Hand #52.

The action folded to Shefrin who moved all-in from the small blind holding pocket queens, and Johnathon Gilliam made the call from the big blind holding K2hh. No kings. Only one heart. Gilliam was out. Shefrin had the chip lead.

The action became four-handed in Level 29.

With blinds at 40k/80k/80k, Liberto raised to 160,000 from under the gun, and Asaf Ben-Sushant called from the big blind. The hand seemed to be heading for the bin marked ‘waste of time’, until, staring at an 8d5c3s5dKh board Ben-Sushant called a 365,000 Liberto bet holding KJo, for a two-pair hand, only for Liberto to show AsKs for a stronger kicker.

That hand reduced Ben-Sushan to a mere six big blinds, and Chris Csik gobbled them up in the following hand when AQcc beat pocket nines, all-in pre-flop after an ace arrived on the flop.

Liberto then took a dominating chip lead into three-handed play after eliminating Ryan Tamanini in fourth-place. With blinds still at 40k/80k/80k, Liberto raised to 160,000 from the button, and then called when Tamanini moved all-in from the small blind for 1,350,000. Liberto tabled AsJc, Tamanini showed QdTd, and despite Tamanini turning a ten to take the lead, the Qs on the river handed Liberto a spade flush draw.

The three amigos played a smidgen over 30-hands before we reached the heads-up phase of the contest.

With blinds still at 40k/80k/80k, Liberto raised to 160,000 from the button and called when Csik moved all-in from the small blind to the tune of 1,600,000. When the cards were turned over, Liberto had Csik crushed with AhKd towering over Ad2s. The dealer burned, turned, and did everything else contained within his roles & responsibilities statement, and nothing changed – Csik was out.

Liberto began heads-up with a 2:1 chip lead over the lively Shefrin, but that soon became a 9:1 chip lead after the next hand.

With blinds at 40k/80k/80k, Liberto opened to 160,000 and Shefrin made the call. The action reached the fourth street before either player threw a chip in anger – Liberto betting 235,000 on the 8d7s5dKs board and then calling a 670,000 Shefrin check-raise. The river card was the Td, Shefrin checked, Liberto bet 2,435,000, and Shefrin made the call. Liberto showed K2dd for the flush that got there on the river, and a dejected looking Shefrin mucked his hand (although he would later tell the live reporter that he held a set).

The action was on Shefrin, who moved all-in for 1,120,000, and Ac8s, and Liberto called with deuces. The board ran out Qd4c3dJs2d, and Liberto became the newest WPTDeepStacks Main Event Champion, and with it a $3,000 package into the season-ending WPTDeepStacks Championship.

The next WPTDeepStacks event comes to you live from the Holland Casino in Amsterdam with the €1,200 buy-in Main Event starting on March 28th. The next North American edition begins on April 4 at Thunder Valley Casino Resort in California.

Tattoo artists, con men, razor sharpeners and silk sheet stitchers – if you fancy a change of career then you’re in luck – the WPT is hiring.

A position has opened up in Irvine, California as a Global Events Manager.

Here are the responsibilities for the role:

• Manage event-related logistics, budgets, staffing, and execution for WPT events.
• Serve as liaison between the WPT and the sponsors in ensuring that all contractual obligations are delivered during the event, as well as compliance by sponsors regarding player-sponsorship guidelines.
• Implement, manage, and monitor the adherence to WPT’s global standards by casino partners (including but not limited to branding standards, official tournament structure, approved payout structure, etc.)
• Manage and coordinate logistics with host venue and approved vendors regarding WPT’s Live Stream broadcasts.
• Performs other duties as required by the Director of Global Tour Management.

And if you live in Europe, then don’t worry, there’s something for you after a position opened up in the Royal Flush Crew. If you ever wondered what these beautiful men and women do then you need not wonder anymore.