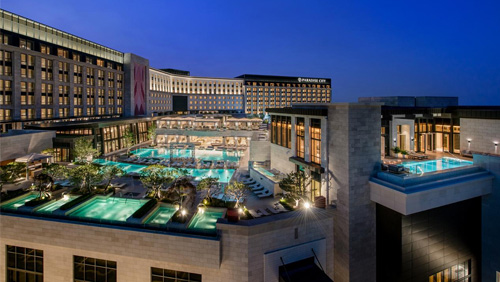 The action got a little too hot at Paradise City casino resort on Sunday. The Incheon, South Korea resort had to be evacuated for several hours as a fire had broken out, reports The Korea Times.

Some 280 customers had to be evacuated in the middle of the afternoon because of a fire in the hotel. It reportedly originated from the women’s sauna at approximately 3:16 p.m. No injuries were reported as no one was in the sauna when the fire started.

The Incheon Fire Department showed up in force for the blaze. A total of 38 fire engines and 200 firefighters arrived quickly, and had the first out in 40 minutes. They don’t know at this time the cause of the fire.

To make it up to guests, the resort gave them a free meal that night, breakfast for the next day, and a voucher for an additional free stay. Not a bad comp for a few hours of milling around outside.

GGRAsia further reports Paradise Co didn’t feel too affected by the fire, saying, “The fire affected almost nothing [in terms of] the casino operation and there will be no stop [to] casino operations.” Damages to the hotel were estimated to be at KRW88 million (US$80,000).

This will hopefully be nothing more than a minor setback for the operator. Paradise Co has otherwise been on an impressive roll, bringing in record revenue increases in January and February.

They’ll be looking to renovate the spa as quickly as possible. Although the casino is restricted to foreigners only, the hotel and other resort facilities are open to the domestic public. Having the full amenities of the hotel open to locals will be important to the continued success of the operator.

They’ll also want to be prepared for an influx of new Chinese tourists this year. The operator recently signed a deal to bring in more tourists with Suncity Group Holdings. If they are going to entertain additional Chinese VIPs, they’ll have to have that women’s sauna ready for their wives to have every option.