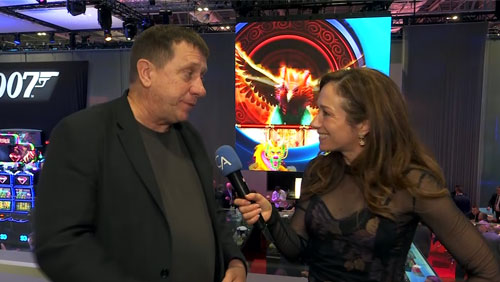 Knowing who your end customer is, and adapting your product for their benefit, is crucial in the gambling industry. The process of localization can mean the difference between a hit product and a flop. Tim Butcher, executive vice president and chief product officer of Scientific Games (SG), joined CalvinAyre.com’s Becky Liggero to talk about the process.

Localizing a game isn’t just a bonus, it’s necessary to its success in new markets. Butcher walked us through how that happened for one of their hit new games. “One of the greatest examples that we’re showcasing here is our Jin Ji Bao Xi brand, which we started in Asia, and it did really well in the Asia market,” he said. “Then we made some modifications to that content for the U.S. that was more applicable for the North American market. This week, at the show, we’re introducing the version that’s coming out for Europe.”

If they hadn’t adapted the game in that same way, it might have failed. “I don’t think we’d be successful with that particular title if we had launched it in Europe,” he said. “We have to make our content applicable to the different regions, and what the players are really attracted to in those regions.”

Localizing a game isn’t just about language translation either. It can involve quite a lot. “In certain cases, you want to make the model, the user experience simpler, you don’t want to give as many options,” Butcher said. “And in a lot of cases the math model is different too because there’s different expectations from the players in the different regions. So there’s a lot of stuff in the background that’s different, that you don’t necessarily see, but it had to be modified to make it work successfully in these regions.”

Many will have the instinctual fear that computers will be tagging their identity with this new kind of software, but that isn’t necessarily the case. “You don’t need to know the player’s identity, you just need to know that this player is unique,” Butcher explains. “So real bullish about computer vision and all the applications it can bring throughout lottery, gaming, digital and social from an SG perspective.”

Liggero concluded the interview asking Butcher about three men who had a profound impact on his outlook, and made him the executive he is today. He said:

How he applies those lessons is how he is now so successful in the gambling sphere. “There’s a lot within Scientific Games that we’re trying to focus on the player first, the content first, and the data first,” he noted. “And that’s kind of a shift to a certain degree in this industry, because a lot of times we try to just say yes and do whatever customization for, you know, one of our partners. Ultimately if we make better games, that players love, that’s better for our customers.”