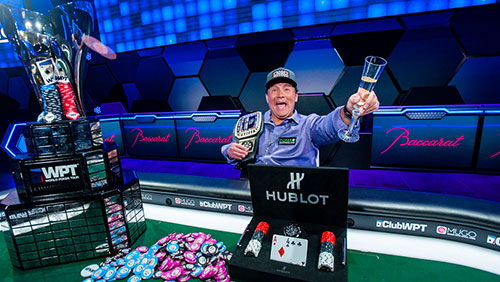 Some called the new arena a ‘tomb.’

Other complained that recreational players wouldn’t compete in WPT events because they wouldn’t want the inconvenience of an additional trip to Las Vegas.

Try telling that to Frank Stepuchin’s family and friends.

Stepuchin finished the LA portion of the $10,000 buy-in WPT Gardens Poker Championship Main Event with the chip lead, but he faced an obscenely challenging time in Las Vegas.

Shannon Shorr is one of the best in the business with $7.1m in live tournament earnings. Shorr came second to James Calderaro in the Season XII Lucky Hearts Poker Open event, and in Season VII he finished fifth in the WPT Championship event in the Bellagio.

Let’s look at the tale of the tape.

Jonathan Abdellatif began the tournament as the short stack and exited as per the mathematical reasoning of these types of things. After doubling through Frank Stepuchin when flopping an ace with AT v KK, he wasn’t so lucky the next time he moved all-in and received a call from the chip leader. The Belgian was ahead with AdKs facing 86hh, but a six on the flop and an extra one on the turn sent Abdellatif packing.

Brent Roberts doubled through Shannon Shorr in a cooler KK>AK.

Then we lost Ray Qartomy.

With blinds at 25k/50k/50k Qartomy moved all-in for 335,000 from the first position, and Stepuchin called in the small blind. Qartomy showed pocket sevens, but Stepuchin had woken up with jacks, and five cards later Qartomy was out.

Steve Sung doubled through Stepuchin when AK beat Q3, and then Sung did it again when A9 outdrew Roberts’ AJ. That beat hurt Roberts, and he left in fourth place after running pocket tens into the kings of Shorr.

It seemed for all the world that Steve Sung and Shannon Shorr were playing for the right to face Stepuchin heads-up for the title, and it turned out to be Shorr after Sung failed to win his big flip against Stepuchin when sevens crashed and burned against KQ.

Stepuchin took a big chip advantage into heads-up against the experienced Short (8.655m v 1.46m), and despite Shorr adding another million to his stack things ended in the following hand.

Stepuchin showed A4 for a pair of aces, and Shorr was ahead with 85 for two-pair. That was until the 4s hit the river to give Stepuchin a better two pair hand, and just like he was the newest member of the WPT Champions Club.

It’s only Stepuchin’s second live tournament win of his career. The first came in July when he beat 2,070-entrants to win the $149,220 first prize in a $375 No-Limit Hold’em Quantum event at the Larry Flynt Grand Slam of Poker in the Hustler Casino, California.

It had been coming.