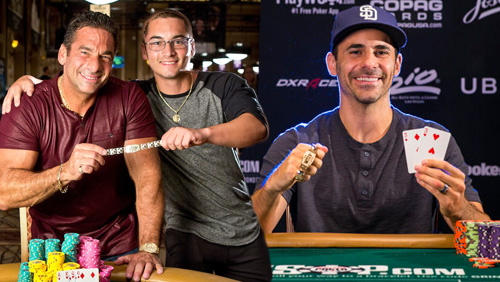 
I wouldn’t like to be in an interrogation room with James Calderaro and Alexy Rybin either side of me, but I bet that’s how the dealer felt during the heads-up phase of Event #67: $25,000 Pot-Limit Omaha High Roller.

The two businessmen, who view poker, in the same way, a random visitor to a beach views water-skiing, cut an impressive pair when they made the heads-up stage of one of the largest buy-in events of the summer.

The final two may have made their money through the world of business, but they can play poker, having both won a World Poker Tour (WPT) title – Rybin winning the 2013 WPT Merit Cyprus Classic, and Calderaro winning the 2014 WPT Lucky Hearts Poker Open.

Rybin entered the heads-up phase with a 2:1 chip lead. It was a swift encounter, lasting 35-minutes, before Calderaro, spurred on by the presence of his 22-year old son Anthony, found the moves needed to overcome the mighty Russian and take the title. His son’s thanks for supporting his Dad, was to keep the bracelet.

It was a sweet moment for Calderaro, who finished third in a $10k Pot-Limit Hold’em Championship in 2010 and has also had numerous near misses on the WPT.

It was also a tough final table, as you would expect at this buy-in level.

Bryce Yockey won the $10,000 Pot-Limit Omaha Hi-Lo Championship and finished fifth in the Millionaire Maker. Dario Sammartino was third in the One Drop for $1.6m, and eighth in the $10k NLHE 6-Handed, and Dan Smith made the final table for the second successive year.

Other notables who seemed to have the aerodynamics of a Space X rocket only to be blasted out of the sky at the last minute were Martin Kozlov (9th), Rifat Palevic (16th), and Tommy Le (18th).

The big boys were sharpening their pencils in readiness for the $10,000 Main Event by turning out in force for the final $1,500 No-Limit Hold’em event of the summer.

1,956 players swelled the coffers, and it was Chris Klodnicki who finally got past the finishing line, after previously finishing runner-up in both the One Drop High Roller (2013) and the $50k Poker Player’s Championship (2012).

This long drawn out affair eventually acquiesced after an additional fourth day of action and looking at the calibre of the final table incumbents you can see why.

Benjamin Zamani is the current holder of the WPT Player of the Year award and won a bracelet this year in a PLO event. Darren Elias is a three-time WPT Champion and was making his third WSOP final table of the year. Kenny Hallaert was making his second final table of the summer, and Aditya Sushant was attempting to follow his tag team partner Nipun Java into the record books by winning his second bracelet a mere day or so after his partner won the $1k online event.

But it would be one of the best players never to win a bracelet who took it down after Klodnicki beat the Jamaican Emile Schiff in heads-up action.

“It feels more like relief,” Klodnicki told the WSOP after finally ripping the monkey off his back and sending it to the taxidermist for stuffing.

Other notables that picked up a silver star in this one was the tea maker Brian Hastings (16th), former Nov Niner Vojtech Ruzicka (17th), and the squid, Sam Grafton (29th).