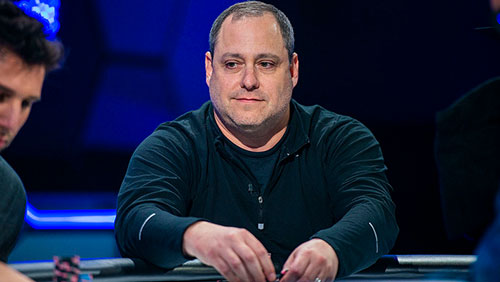 545-entrants had begun this event in the Commerce Casino, Los Angeles, but only six of them flew into Las Vegas to finish things off at the new home of WPT North American Main Event Final Tables in the Luxor.

Baker began the contest nestled in joint second place with WPT Champions Club Matas Cimbolas as Darren Elias took a commanding chip lead into his quest for an unprecedented fifth WPT Main Event title, and it would be those three who would scratch and fight for the million dollars at the death.

The shortest stack at the table belonged to John Smith, and it was the 72-year-old who got it in first, doubling through Baker in a flip AQ v TT with the ace arriving on the turn.

Then we lost our first player.

With blinds at 30k/60k/60k, Steve Yea moved all-in for 890,000 from the hijack seat, and Matas Cimbolas called on the button. Yea showed Ah3h, and Cimbolas showed pocket jacks. Yea did flop a second trey, and a backdoor flushdraw but that’s about as exciting as the hand got for the Korean native who had to settle for a sixth-place finish.

We lost our septuagenarian at the same level.

The action condensed to three-handed play after Jean-Claude Moussa hit the rail in fourth. With blinds still at 30k/60k/60k, Baker opened to 160,000 from the first position and then called after Moussa moved all-in for 580,000 on the button. Moussa showed AhTc, and Baker showed pocket queens. The aces stayed in the deck, and Baker would square off against Darren Elias and Cimbolas for the million dollar prize.

David Baker gained control of the deck when three-handed, and pulled into a considerable lead against the WPT Champions Club members. Darren Elias’s attempts to win an unprecedented fifth title looked to be sliding into the abyss until he doubled through Cimbolas KK>KJ.

Elias then took the lead, and it was Baker who plummeted to the foot of the chip counts, with Cimbolas happy to be the meat in this particular sandwich, until Baker regained control doubling through Elias AA>66. The 4-time WPT Champion never recovered from that blow, and with blinds at 75k/150k/150k, Elias shoved the button for 950,000 holding 7c4c, and Cimbolas took him apart with Ad2d.

Baker would start his heads-up battle with Cimbolas with a 2:1 chip lead, but Cimbolas doubled into contention when TT beat A3 all-in, pre-flop after Baker had extended his lead to 3:1.

Undeterred, Baker slipped into another gear, speeding away from the Lithuanian once more until with the blinds at 150k/300k/300k, Cimbolas limped the button, and Baker checked from the big blind. The flop rained down AhTc3s, and Baker check-called a 300,000 Cimbolas bet. The 6h landed on the fourth street, and the same action ensued this time for 600,000. The final card of the tournament turned out to be the 2h, and Baker switched tactics putting Cimbolas all-in. With no time extensions remaining for the former WPT UK Main Event Champion a quick call had to be made, and it turned out to be the wrong one. Cimbolas showed Ts5d for the second pair, and Baker showed 5c4c for the runner-runner straight, hugs, title and million dollars.

“It kind of sounds corny, but it really means so much to me,” Baker told the WPT after his win. “I’ve battled my whole life in this business, I care about this business, I care about the prestige of these things, and I know some of the guys are a little too cool for school. But I’ve had a glaring omission on my resumé. I get to check off all those boxes today, and I’m overjoyed.”

The WPT L.A.Poker Classic final table is the first of three WPT Main Event final tables to reach a conclusion at the HyperX Esports Arena Las Vegas with the WPT Gardens Poker Championship and the WPT Borgata Poker Open also scheduled to climax this week.

The British Poker Awards: My Tip for International Player of the Year
Lee Davy
25 February 2014