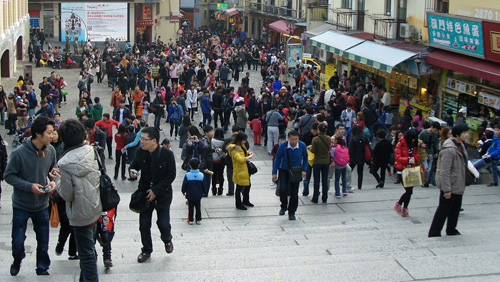 Macau is starting to become a victim of its own success. Its Legislative Assembly will debate how they can counter the negative effects brought on by increased tourism, reports GGRAsia.

Sulu Sou Ka Hou is the legislator who is spurring on the debate. He’s questioning how the city can meet its goal of being a tourism mecca when it’s already struggling to handle the number of tourists being drawn in, and cites “worsening leisure conditions.”

What he proposes is a cap on inbound visitors, and argues that the existing strategy, of attempting to spread tourism out throughout the autonomous region, is having adverse side effects. He argues that the roads are unable to handle the increase in traffic, and small companies are suffering from higher rents.

According to a 2015 research study, Macau’s optimum capacity for tourists is somewhere between 32.6 million and 33.7 million. That’s much less than the 35.8 million the city saw in 2018, and even more are expected this year.

Part of the issue is the increasing ease in traveling to Macau. The new Hong Kong-Zhuhai-Macau (HKZM) bridge immediately created an increase in visitors from Mainland China. That’s great for the tourism industry, but Hou argues that the rest of the population just can’t handle the influx.

Recently, Macau’s government expressed their desire to diversify their tourism options, to help give tourists more leisure options, and possibly to spread out their activity a bit better in the region. That may help, and may bring increased business to more parts of the city; however, if Hou’s concerns are about increasing land values and traffic, it’s not likely to help much at all.

These are really the growing pains of a successful, booming city. Hou is right to be concerned about the effects on the general population, and it would serve Macau to make sure the prosperity is well dispensed, and not concentrated amongst big business owners. Holding back tourism though won’t be a solution, it’s just biting the hand that feeds.