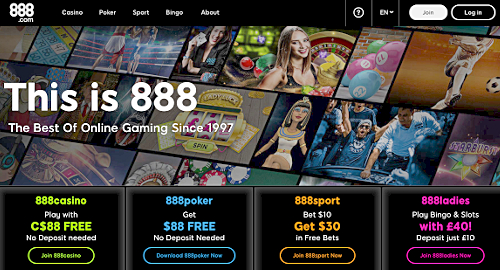 UK-listed online gambling operator 888 Holdings reported record earnings in 2018, even as business in its poker and bingo markets declined by double-digits.

888’s new CEO Itai Pazner praised his company’s performance despite “headwinds in some areas of the business,” including increased regulatory scrutiny by the UK Gambling Commission. UK revenue was down 16% to $170.6m, pushing the market’s contribution to overall revenue down five points to 32%, which the company dismissed as the result of its ‘diversification strategy.’

Speaking of, 888’s revenue from Europe, Middle East and Africa markets (excluding the UK and Spain) was up 7% to $228.9m while the Americas improved 4% to $48.1m and the rest of the world’s contributions fell 10% to $14.3m, in part due to 888’s forced exit from Australia’s regulated online betting market.

Spain, the company’s biggest market outside the UK, accounted for 13% of 888’s revenue last year, up one point from 2017. Spanish revenue improved 8% to $68m but would have been higher were it not for declines in the Spanish-facing poker business, which the company blamed on its delay in dipping into the EU liquidity pool like some of its local rivals.

888’s Italy-licensed operations reported revenue up 29% in 2018, in part due to the launch of its poker vertical in January 2018. While the Italian sports vertical was described as “robust” and first-time depositors doubled from 2017, 888 warned that the market’s future growth would suffer from the new gambling taxes and the blanket ban on advertising.

888 has high hopes for US market expansion, even though its December deal for total control of the All American Poker Network (AAPN) came just one month before the Department of Justice revealed its new opinion on the scope of the Wire Act, which specifically targets the type of interstate activity the AAPN hoped to capitalize on.

Given the UK’s ongoing Brexit debacle – which suffered yet another blow Tuesday – 888 announced that it had taken steps to ensure continued access to European Union markets, including securing a new license from the Malta Gaming Authority and establishing a server farm in Ireland. (GVC Holdings recently established its own server network in Ireland for similar reasons.)