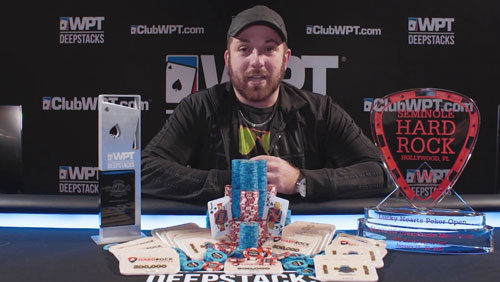 Two tournament wins to catch up with at the World Poker Tour with Jason Young returning to the felt to take down a humdinger of a WPTDeepStacks Main Event in Florida, and Darren Elias topping a teeny-tiny field in a $25k at the Gardens Poker Championship.

Jason Young may be a stranger to you, but when you watch the final moments of his victory in the WPTDeepStacks Hollywood Main Event at the World Poker Tour (WPT) Lucky Hearts Poker Open, you know him.

There was a fresh set of sheets feel about this win. A life that once thrived like the ocean at his front door, reduced to a tidal pool.

“It’s been a long journey to get back here,” the man from Delray Beach told his interviewer. “I didn’t think I would ever be back in a position like this, but compared to the past 5-6 years, this is a picnic. Nothing was going to rattle me. This doesn’t rattle me.”

Since winning a World Series of Poker (WSOP) bracelet in 2008, beating a 1,000-entrant field in the $1,500 No-Limit Hold’em Shootout to claim the $335,565 first prize, Young opened and closed a restaurant, and became a single father.

Checking his social media channels you can see that his daughter Kaeley is his world, and that’s who he intended to celebrate his victory with after beating the WSOP bracelet winner, Leif Force, heads-up, for the title.

“It’s been eight years since I have played,” said Young. “After a win like this, I want to put in more volume.”

Young’s triumph at the Seminole Hard Rock in Florida was his fourth career win and tips his lifetime earnings over the $1m mark.

Three other stars who went deeper than a bottle of wine stuck in a rack on a sunken Spanish Galleon include Nick Yunis (10th), Mohammad Siddiqui (13th) and Joseph Cheong (28th).

It nearly flew under the radar, but like my wife’s placenta, I caught it.

The WPT and Gardens Casino in California held a $25,000 High Roller during the WPT Gardens Poker Championships, and who else won it but the man who eats WPT titles like the French eat Moules-frites, Darren Elias.

The event only attracted 11-entrants, and Elias beat Chance Kornuth, heads-up, to bank the $192,500 first prize. Kornuth more than tripled his buy-in, banking $82,500 for his runner-up position.

The win was Elias’s tenth live tournament victory of his career, including a record-breaking four WPT Main Event triumphs. Kornuth had a decent showing at the Gardens making three final tables, including winning a $5,000 Pot-Limit Omaha 6-Handed event for $42,300. ​