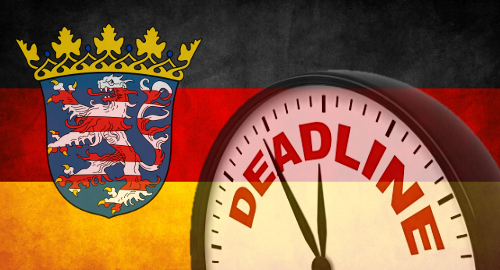 The German state of Hesse has vowed to go it alone on gambling legislation if a new federal pact can’t be reached by the end of 2019.

Shortly before Christmas, Hesse’s governing coalition of the Christian Democratic Union and Greens parties released their official coalition agreement indicating their priorities for their current term. Among these priorities is ensuring that gambling operations are “finally legally and practically regulated in a coherent manner.”

Hesse’s coalition is giving the rest of the country until the end of this year to approve “satisfactory” gambling regulations. Given the historical futility of this challenge, the Hesse government will reportedly begin preliminary work on its own prospective gambling legislation when its state parliament reconvenes on January 18.

Germany’s gambling market has been one gigantic question mark after German and European Union courts ruled that the 2012 State Treaty on Gambling was legally sketchy. That treaty called for the legalization of online sports betting but put an arbitrary cap on the number of online betting licenses, while refusing to authorize online casino or poker products.

A revised federal gambling treaty met a similar fate in 2017 after the state of Schleswig-Holstein – which had previously approved its own more comprehensive online regime – refused to sign on to the new federal plan. Shortly before Christmas, the online licenses that Schleswig-Holstein issued in 2012 began to expire, injecting further uncertainty into an already confusing regulatory climate.

In 2016, Hesse attempted to thread the regulatory needle by offering ‘temporary toleration dispositions’ that would have authorized intrastate online betting, but these temporary permits were ruled invalid by a local court the following year.

Hesse and Schleswig-Holstein aren’t the only German states prepared to go it alone if federal consensus can’t be reached. Previously, the state governments in North Rhine-Westphalia and Rhineland-Palatinate had signaled their intention to adopt Schleswig-Holstein’s more sweeping view of online regulation, and the state of Bavaria is reportedly also keen to get something done on this front.