Home / Poker / PokerStars line up the celebs for PSPC; Negreanu getting hitched 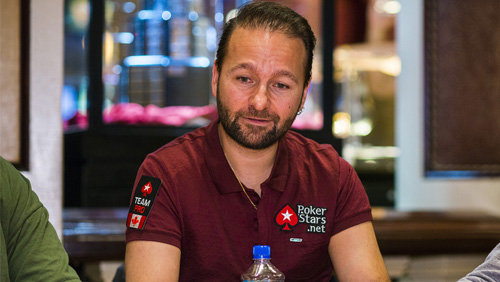 Two tales from the world’s largest online poker room including news on the celebrities lined up to attend the PokerStars Player’s No-Limit Hold’em Championship, and Daniel Negreanu proposes to Amanda Leatherman.

My wife had never heard of The Jam.

We went to listen to Sir Bob Geldof introducing Jeremy Griffith’s ode to the human condition in some swanky place in London.

I used to think she was dumber than a mermaid deciding to move her shell to Birmingham until PokerStars asked me if I wanted to interview some of the celebrities that are planning to show up at the Bahamas for the PokerStars Player’s No-Limit Hold’em Championship (PSPC) and the PokerStars Caribbean Adventure (PCA).

So, I have some work to do. Research. The bane of my life. It began at the New Year’s Eve dinner table. I asked my American family for questions to ask Pierce.

“Ask him what was the best club he ever played for,” suggested my brother-in-law.

“That’s the dumbest question, ever,” replied his son.

But it’s a good stuck.

It’s a nice shot to the arm to learn that you’re interviewing a celebrity, but then you remember that your questions will likely fail to pierce the armour of the people paid to protect them. Let’s hope it’s different in the Bahamas, and I can generate a question or two that provides their fans with an answer they’ve not heard a thousand times before.

PokerStars has promised to provide the experience of a lifetime for the 300+ Platinum Pass winners who could never dream of rolling the dice with the best in the world in a $25,000 buy-in event, with millions up top.

An infusion of celebrity is a part of that promise.

There may be more, but for now, these are the six stars of sport and entertainment who will look me in the eye across a Bahamian poker table, and hopefully, when they do, they won’t be saying – no comment.

Should a person born with male genitalia who later transitions to being a woman, be allowed to compete in physical sports against other women. Boxing, MMA, wrestling, swimming, etc.

I love anyone who thinks and then puts that thought out to the world. Alright, so Negreanu has a filter of sorts (genitalia versus cock, balls and fanny), but it’s a thin one.

So when the man decided to get hitched we hear about it.

I am sure you will all recognise the hand of Amanda Leatherman, his former girlfriend and now current fiancée.

The PokerStars marketing machine missed a trick with this one. We could have had a triple PSPC wedding with Platinum Pass winners flipping for best man, bridesmaid and page boy roles.