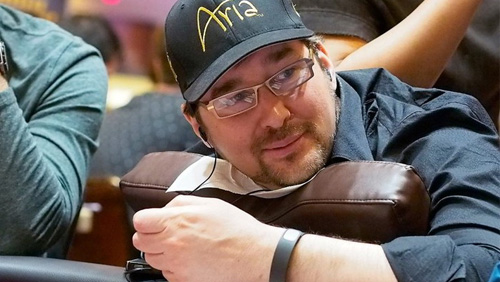 Phil Hellmuth apparently has other talents besides poker. The Poker Brat recently participated in a tennis prop bet in which he had to return at least one serve out of 20 against a professional tennis player. He gladly accepted the challenge and not only returned a serve, but added some additional cash to his winnings.

According to the rules, returning one serve would net the poker pro $7,000. Scoring a point would earn him an additional $16,000. The only caveat in Hellmuth’s favor was that the serve could not be faster than 8 mph. Given that the average speed of a serve by male tennis pros is around 114 mph, 80 mph must have been like trying to hit the ball in slow motion.

Hellmuth released a series of videos showing off the results of the bet, and the competition wasn’t pretty. He barely touched the ball with his racket on the first serve and then helplessly watched as the ball floated passed him on the second serve to give the unidentified pro an ace. He then found his groove, which made his opponent a little nervous—Hellmuth was offered $3,000 to back out of the bet.

Finally, on the eighth serve, Hellmuth found the sweet spot. He nailed the serve and returned the ball to pick up the full $23,000.

This isn’t the first time that Hellmuth has been able to excel away from the felt. Last year, he participated in a prop bet that saw him put up $1,000 to Doug Polk’s $10,000 that he could score a three-pointer on the basketball court. With a crowd of poker pros that included Shaun Deeb and Olivier Busquet as witnesses, he flexed his arms, lined up the shot and that was all she wrote—Hellmuth was $10,000 richer.

If Polk had been paying attention, he would have known that Hellmuth was no stranger to b-ball. He has been a fan of the game for a long time and is an avid follower of the Golden State Warriors.