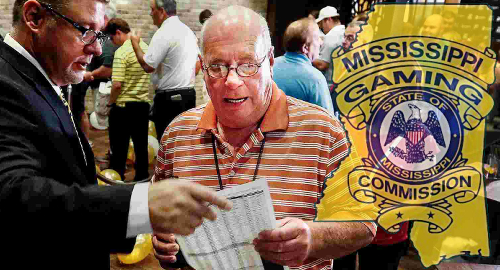 However, while September’s betting revenue totaled a respectable $5.3m thanks to an outsized 17.3% hold, October’s revenue tumbled to $1.18m as hold fell to a dismal 3.6%. (The numbers don’t include contributions from the state’s tribal casinos, which have their own sportsbook operations.)

Mississippi’s numbers somewhat mirror the October results in New Jersey, which saw handle shoot up 41% while revenue fell by more than half from the previous month. Casinos in legal betting states, which are used to generating a more or less predictable return from their slots and gaming tables, are suddenly discovering that footballs do indeed bounce in mysterious ways.

New Jersey’s much larger betting handle rise is likely due to that state allowing online and mobile wagering, while Mississippi’s action is entirely land-based. The overwhelming growth in New Jersey’s October handle came via digital channels.

Fortunately, the state’s casinos still managed to eke out a year-on-on-year gaming revenue gain for the month, rising over $10m to $167.3m. However, that’s more than $15.5m less than the casinos brought in during September 2018. For the year-to-date, gaming revenue totals $1.77b, up less than 2% from the same period last year.

LOUISIANA GREEN WITH ENVY AT MISSISSIPPI WAGERING
Across the border in Louisiana, lawmakers have yet to approve sports betting legislation, although the state’s voters approved daily fantasy sports via a referendum on this month’s mid-term election ballot. But concerns are growing that the state’s casinos are bleeding customers to Mississippi’s shiny new betting options.

Last week, the Louisiana Watchdog quoted Louisiana Gaming Control Board chairman Ronnie Jones saying he was seeing more Louisiana license plates in the parking lots of Mississippi casinos. Jones said it was hard to quantify how much action Louisiana casinos were losing through their lack of legal betting options, but acknowledged that Mississippi’s gaming venues “are getting some of our business.”

Louisiana’s latest legislative attempt to legalize wagering never got out of committee, and while that bill’s sponsors have vowed to try again in 2019, Jones noted that there was “still a huge anti-gaming sentiment in the state legislature.”