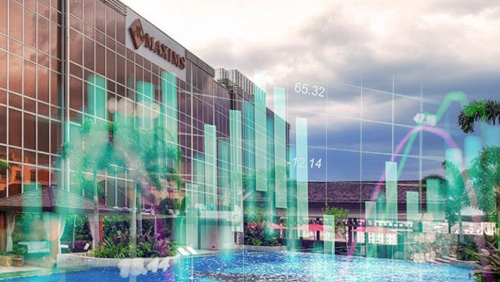 Travellers International Hotel Group, Inc. reported a profit of PHP133.2 million ($2.5 million) for the third quarter of 2018, compared to a net loss of PHP409.8 million ($7.7 million) during the same period last year.

In a filing, the company, owned by Manila-based Alliance Global, Inc. and Genting Hong Kong Limited, reported a profit of PHP1.8 billion ($34.3 million) for the first nine months of the year, continuing its turnaround from the previous year’s losses. From January to September of 2017, net loss was PHP36.8 million ($695,000).

Gross revenue was PHP5.9 billion ($111.8 million), 3.2% higher than the same period last year. Gross gaming revenue (GGR) was PHP4.7 billion ($89.5 million), 33.6% higher year on year, “primarily due to the improvement in volume in both non-VIP and VIP segments,” according to the report.

Non-gaming activities, including operations from the Marriott Hotel Manila, Maxims Hotel, Holiday Inn Express Manila Newport City, and Courtyard by Marriott Iloilo, was PHP1.2 billion ($22.3 million), up 27.7% from the third quarter of 2017. “The increase was primarily due to the improvement in occupancy rates and average room rates,” the report read. Property visitations averaged 27,500 a day, at an average occupancy rate of 79%.

Earnings before interest, taxes, depreciation, and amortization (EBITDA) for the third quarter was PHP211.7 million ($4 million), 47.25% lower than the previous year for the same period.

The Hilton Manila opened last October 25, with Phase 3, dubbed the ‘Grand Wing,’ to contain the Hilton as well as the Sheraton Manila Hotel, and Hotel Okura. All in all, the new hotels will add about 940 rooms to the previous total room count of 1,454, and will include new gaming, entertainment, and retail spaces.

As of end-September, the owner of Resorts World Manila operated a total of 280 tables, and 1,642 slot machines.