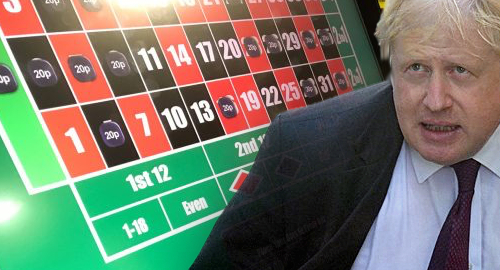 The UK government’s internal strife over when to cut the maximum stakes on fixed-odds betting terminals (FOBTs) ratcheted up on Monday as rogue Tories threatened to derail the new budget.

On Monday, habitual fame-whore, honorary fourth stooge and occasional Tory MP Boris Johnson added his name to the growing list of parliamentarians demanding that the government accelerate the timeline for reducing FOBT maximum stakes from their current £100 to £2.

Last month, Chancellor Philip Hammond introduced his Autumn Budget 2018, which made no mention of FOBTs but announced the government’s intention to hike the Remote Gaming Duty (online casino tax) from 15% to 21% as of October 1, 2019.

The RGD hike is intended to offset the decreased tax revenue from the FOBT stake cut, meaning both changes are to take effect at the same time. But many parliamentarians claim the original plan was to cut FOBT stakes by April 2019, which would suggest the stake cut is being delayed, a claim the government rejects.

Since the FOBT cut isn’t specifically mentioned in the Budget, some 70-odd MPs – including Boris and around 20 other renegade Tories – have signed on to budget amendments that would prevent the government from implementing the RGD hike without advancing the FOBT stake cut to April 2019. The amendments will be put to a vote on November 21.

UK investors didn’t much like the new development, as Monday’s trading saw William Hill’s share price down 3.6% and GVC Holdings (parent company of the Ladbrokes and Coral high-street brands) down 6%. Even some online-only firms like Kindred Group were down on the day, possibly out of fear that the RGD hike might also move up to April 2019 (although new advertising restrictions in Belgium appear the more likely culprit).

Meanwhile, the Guardian reported that Hammond used a report commissioned by the Association of British Bookmakers (ABB) to justify the October 2019 FOBT stake cut timeline. The report claimed there would be thousands of betting shop closures following a stake cut, along with up to 21k job losses.

But the Guardian reported that KPMG, which prepared the report, included a disclaimer saying that the report was “performed to meet specific terms of reference” agreed with the ABB, and that there were “particular features determined for the purposes of the engagement.” KPMG thus suggested that the report shouldn’t be regarded as “suitable to be used or relied on by any other person or for any other purpose.”

The Guardian also noted that UK-listed gambling operator Paddy Power Betfair (PPB) had itself cast doubt on some of the report’s claims, suggesting that the impact of the FOBT stake cut would be “far less severe than the depiction provided by the ABB.”

However, the Guardian neglected to mention that PPB is far less reliant on betting shops than many of its UK rivals (Hills, Ladbrokes-Coral, Betfred, etc.). As such, the impact of a stake cut would do far more damage to those companies than to PPB, potentially offering PPB a competitive leg-up, at least for a time, although PPB execs have routinely denied any ulterior motive.