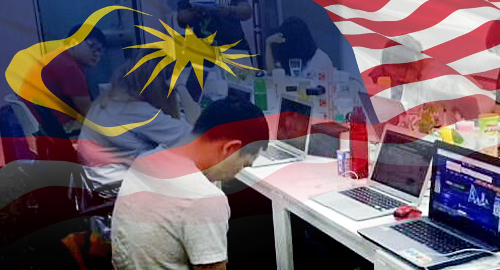 Malaysian authorities have broken up yet another major Chinese-led illegal online gambling operation.

On Tuesday, Malaysian authorities gave a press conference to reveal the details of an operation last Friday (9) that resulted in the arrest of 118 individuals suspected of running an illegal online gambling operation from a bungalow in Kuala Lumpur.

Only one of the suspects was a local resident, with the rest hailing from China. The Chinese nationals had reportedly entered Malaysia on tourist visas and their operation primarily targeted gamblers in their home country.

Police claimed the operation, which promoted its activities via Chinese social media app WeChat, handled wagers of around RM6m (US$1.43m) per month. Payment processing was handled via WeChat Pay and the Alipay service. The raids resulted in the seizure of 479 mobile phones, 118 laptops and other computers, along with a small amount of cash.

City police chief Comm Datuk Seri Mazlan Lazim said the gambling ring had chosen Malaysia as its base of operations due to its mild punishments for illegal gambling, at least, compared to penalties in China. Regardless, the chief said his office had contacted the Chinese embassy regarding the matter.

The ring reportedly paid rent of RM30k each month, a significant sum for the region, which police suggested was intended to dissuade the landlord from asking too many questions about what was going on inside the bungalow.

The arrests followed hot on the heels of a separate raid of a Kuala Lumpur-based illegal online casino ‘customer service department’ that targeted both Malaysian and Chinese customers. That operation randomly spammed “hundreds of thousands” of phone numbers with promotional texts advertising its gambling services.

On Monday, Deputy Home Minister Datuk Mohd Azis Jamman said there was currently no effective means of combating illegal online gambling, given the ease with which operators can revise their servers’ internet protocol addresses. Jamman also rued the fact that there were 700k “dubious” prepaid mobile phone accounts in the country, many of which are believed to be used for gambling purposes.