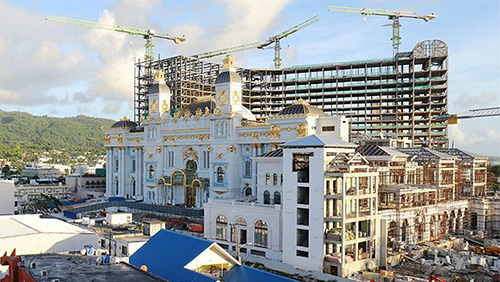 Imperial Pacific, the contentious company that hopes to one day, maybe, possibly, complete the Imperial Palace integrated resort (IR) in

Saipan, wants $38.3 million. In a filing with the Hong Kong Stock Exchange this past Monday, the company has announced that it will launch a bond placement to raise the funds, with the money, minus commissions and other expenses, being used “for general corporate purposes.”

The bond placement will be managed by Run Investment Services, Ltd., who has sole discretion over the project. The company expects the bond to be placed “to not less than six” independent third parties.

The bond would probably not have been necessary of the company held its patrons accountable for their gambling habits or if Imperial Pacific wasn’t so loose with credits. The operator wrote off almost $733 million in gambling debt over the first half of the year. Just under half the amount was owed by only ten clients.

Imperial Pacific has faced a number of delays (and a fair amount of deserved ridicule) for the never-ending drama of the Imperial Palace IR. It has had to ask for several construction extensions since getting things moving last year, at one point assuring the public that the resort would be ready by the end of 2018. Two weeks later, it issued a new extension request, indicating that it wouldn’t be able to complete construction until the end of 2021 or at some point in 2022.

The company has become so desperate to find someone to run the helm that it just pulled former chairman Mark Brown out of retirement to try and right the ship. Brown had left the company in December of last year in order “to pursue other projects close to his family” after serving as the chairman for just one year. He had previously held the position of CEO for the company for just under two years.

As part of its construction project, Imperial Palace is expected to see the addition of 2,000 hotel rooms. However, the Commonwealth Casino Commission (CCC), which oversees gaming operations for the Northern Mariana Islands, doesn’t understand the company’s logic behind the large amount of keys. It points out that there would need to be at least two million tourists each year to the resort to cover the supply – last year, there were only 659,741. An increase of more than 200% is unrealistic and indicates that Imperial Pacific’s lofty goals are not financial tenable.