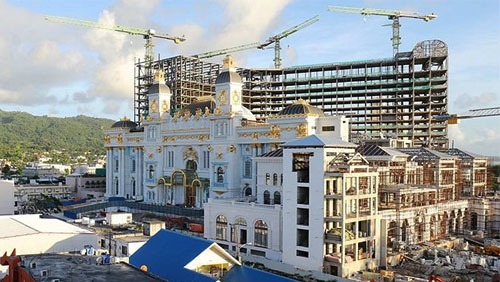 At the beginning of July, Imperial Pacific International (IPI) indicated that it probably wouldn’t be able to meet the August deadline to have construction completed on its Imperial Palace Resort (IPR). Despite talks of putting on a night shift and bringing in additional construction workers, the company has now confirmed that it is still behind schedule and has asked for yet another extension.

IPI was told by Saipan’s Lottery Commission in April 2017 that the new 350-room hotel facility must be completed by August 2018. The company said that it would have no problem meeting the requirements; however, a slew of issues related to employment and construction delays have consistently bogged the company down, preventing it from being able to maintain its momentum. As it hasn’t been able to meet the deadline, the company is in jeopardy of losing its casino license.

In June, Hong Kong-based IPI told authorities that it was “working diligently” to meet the schedule. However, a week ago, the company sent a letter to the Commonwealth Casino Commission’s executive director, Edward Guerrero, in which it admitted that there was no way that it can finish on time.

According to the Saipan Tribune, IPI has requested a deadline extension through the Lottery Commission, anticipating it would need about another six months to complete the project.

The resort is expected to offer a luxury hotel and a casino with anywhere from 200 to 300 gaming tables and 300 to 400 slot machines. It has already run over the $500 million original budget and will more than likely continue to do so given the most recent request for yet another extension for the hotel’s completion.

IPR was initially expected to open all aspects of the operations by “Chinese New Year 2017,” which began on January 28 last year, but only got the casino off the ground—after delays. This prompted the inclusion in the contract for the hotel to be completed by the initial deadline and the subsequent repeated casino license extension requests as a result of the almost-comical series of construction delays on the hotel.