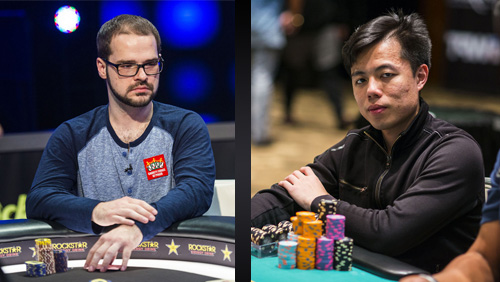 Matt Stout, Jeff Gross and Nathan Manuel win at Run It Up Reno, and Rocky “ratedGTO” Guan joins Team Run It Up.

I got married in a drive-through in Las Vegas.

To save $10, I parked the car on the sidewalk, and the pair of us walked to the window to say our vows. We were wearing sunglasses and shorts. My soon-to-be wife answered a phone call from her mother as the woman who was about to merge us into one opened her mouth.

“Welcome to this fabulous occasion,” she said.

Later we went to the Peppermill in Las Vegas for breakfast, now that was fabulous.

From the Peppermill in Las Vegas to the Peppermill in Reno, and Jason Somerville and the gang have just put on one hell of a show at Run It Up Reno VII, and some well-known faces ended up with a trophy in their hands.

The win, Stout’s seventh, takes his total live tournament earnings over the $4.1m mark. Stout doesn’t have the time to play many live tournaments these days, due to his commitment with the Charity Series of Poker (CSOP), so he will lap it up I am sure.

The $48,210 that Martin earned for finishing runner-up is the most substantial chunk of change of his career.

One Run It Up Ambassador that did cross the finishing line in first place was Jeff Gross. The creator of the Poker Flow Show took down the 51-entrant $550 Pot-Limit Omaha Six-Max to win the $8,075 first prize, his fourth tournament win.

Give Nathan Manuel his dues.

After flying to London to compete in the PokerStars Megastack Tour, attempting to learn Japanese to win Jaime Staples Ultimate Sweat competition, and grinding the Moneymaker Tour into the ground, perseverance paid off for the lad.

Manuel topped a field of 825-entrants in the $86 buy-in Moneymaker Tour as part of Run It Up Reno, calling his Platinum Pass win a really, really rare and special opportunity.

Manuel has more than $170,000 in live tournament earnings; this is his fifth tournament win since he began racking up points in 2015. His most significant score was $33,871 for finishing runner-up to Roberto Damelian in a 263-event AUD 1,050 Hyper Turbo No-Limit Hold’em at the Aussie Millions earlier this year.

And Team Run It Up has grown by one.

Ricky “ratedGTO’ Guan becomes only the fourth member of the Run IT Up team not sponsored by PokerStars after Somerville snapped him up. Guan told PocketFives’ Donnie Peters that him and his buddies “The Young Wizards” recently moved to New Jersey so they could play on PokerStars and stream live (don’t post a photo of your grinding house on Instagram).

Matt Stout: “The CSOP Has Officially Taken on a Life of Its Own.”
Lee Davy
9 August 2016