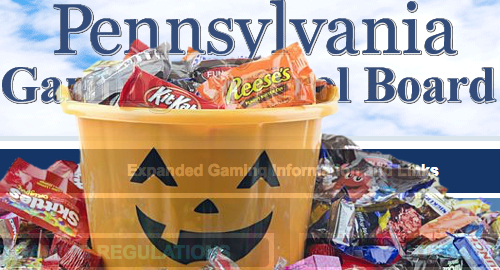 Halloween saw Pennsylvania gambling authorities dole out a smorgasbord of regulatory tricks and treats to the state’s casino operators.

The PGCB gave interim approval to the online gambling petitions of Presque Isle Downs (owned by Churchill Downs Inc) in Erie and the unbuilt Stadium Casino project (a joint venture of Cordish Gaming and Greenwood Gaming & Entertainment) in Philadelphia. That brings the state’s number of approved online gambling operators to nine.

However, reports surfaced earlier this month that the Stadium project had hit a snag and that its JV partners were looking to unload their license. The Stadium rep who appeared at Wednesday’s hearing neither confirmed nor denied these rumors, but did say that the project was “in a bit of a pickle” and asked the PGCB to reduce the scope of its online application to slots and table games only, ditching plans to offer online poker.

That ups the number of available online product licenses to 11 – five poker, three each for slots and table games – on which ‘qualified gaming entities’ can bid. MGM Resorts is reportedly among the out-of-state entities pursuing these unclaimed licenses, which will eventually be awarded via a ‘blind drawing’ to applicants who make the grade.

SPORTS BETTING
The PGCB also approved the sports betting petitions of the operators of Harrah’s Philadelphia Casino & Racetrack, Rivers Casino and SugarHouse Casino. That brings the number of approved betting permits to five, joining Penn National Gaming’s Hollywood Casino and Greenwood Gaming’s Parx Casino, who received their diplomas at the start of October.

Scientific Games will assist Harrah’s in prepping its new sportsbook, which as yet has no official launch date. Rivers and SugarHouse, both of which are owned by Rush Street Gaming, will rely on betting tech providers Kambi to get each venue ready to launch temporary sportsbooks by December 1, with permanent betting areas to follow in the new year.

On Tuesday, Hollywood Casino’s VP of marketing Fred Lipkin told Penn Live that his property’s sportsbook was targeting a “mid-to-late November” launch. Hollywood’s sports betting services will be supplied by William Hill US, whose application to operate in the state was also approved by the PGCB on Wednesday.

Pennsylvania’s legislation also permits online and mobile wagering but none of the five casinos approved to offer betting have indicated when their digital wagering systems might be ready for the PGCB’s inspection and approval.

NO CANDY FOR YOU
The PGCB wasn’t all about full-size Snickers bars on Wednesday, as it also slapped five-figure fines on three casinos and a four-digit penalty on a gaming device maker.

Harrah’s Philadelphia was fined a total of $40k for two infractions: allowing the operation of non-compliant slot machines and for shoddy record-keeping in Roulette Chip Discrepancy Logs.

Presque Isle Downs was fined $45k for five incidents of individuals under the age of 21 gaining access to the gaming floor where they played slots and table games and consumed alcohol.

Parx owner Greenwood Gaming was penalized $22,500 for three instances of putting progressive slots into play without the approval of the PGCB’s technical field rep.