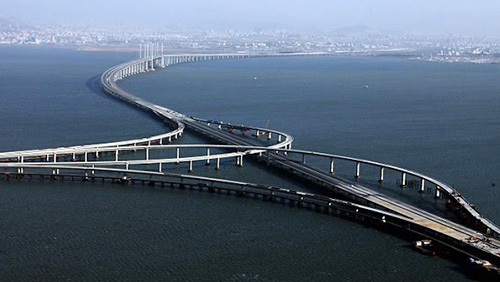 According to a report by the Chinese Liaison Office in Hong Kong, the much-anticipated bridge connecting Hong Kong with Macau will be officially inaugurated during an opening ceremony next Tuesday, October 23. The Hong Kong-Zhuhai-Macau (HKZM) Bridge crosses the Pearl River Delta and will provide the first direct-line road link between Hong Kong International Airport and Macau.

The opening ceremony is scheduled to be held in Zhuhai, according to the South China Morning Post. In addition to local officials and personalities, China’s President Xi Jinping is expected to attend the event.

The bridge is 34 miles long and is reportedly the longest sea-crossing bridge in the world. It has been billed as a significant time-saver, cutting drastically the travel time needed between the three cities. The bridge will allegedly allow a trip between the cities to take less than an hour.

Governments of each of the cities conducted trials of the new infrastructure in September that lasted three days. The trials were organized to test road links and cross-boundary facilities.

Unfortunately, the HKZM Bridge won’t be open to everyone. The Transport Bureau of Macau said this past May that casino shuttle buses are not authorized, but added that it was discussing options directly with casino operators to possibly have them offer shuttle service from the Macau boundary line to their operations.

This past summer, industry analysts predicted that the bridge wouldn’t bring a windfall to the area. Vitaly Umansky, an analyst with Sanford C. Bernstein, pointed out that the ability for tourists to drive directly to the area did “not look like it [was] happening any time soon.” He added, “I can envision a shift of low-end tour groups—that pass through Hong Kong on the way to Macau—to using the bridge versus the ferry due to lower cost…Until the Hong Kong International Airport to Macau transit becomes convenient—more so than is currently contemplated—I do not foresee a major impact from the bridge.”