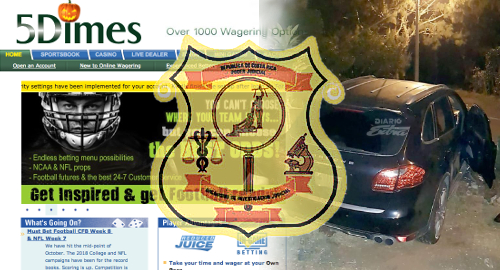 Costa Rica police are investigating the disappearance of the owner of local online sportsbook 5Dimes after he was reported missing late last month.

On Tuesday, Costa Rica’s Judiciary Investigative Police (OIJ) confirmed that they are investigating the disappearance of 43-year-old William Sean Creighton, known throughout the online sports betting world simply as ‘Tony,’ who hasn’t been seen since he left work on the night of September 24. His wife, a Costa Rican national, reported him missing the following day.

OIJ chief Walter Espinoza told reporters that police have yet to receive any ransom requests and declined to offer any further specifics, citing the sensitivity of the ongoing investigation. But local tabloid media outlet Diario Extra reported that Creighton had been abducted by up to four men and that a sizable ransom had already been paid by his family.

According to this report, Creighton’s Porsche Cayenne Turbo (pictured) was forced off the road that night by two gunmen on a motorcycle and two more individuals in a BMW. Creighton’s wife reportedly received a call from his captors later that night, demanding payment of US$750k. (CRhoy.com claimed the ransom was $1m, so all these reports should probably be taken with a grain of salt.)

Creighton reportedly spoke to his wife during this call to assure her that he was fine, and a payment in ‘virtual currency’ was said to have been transmitted electronically to his captors that same night. However, Creighton’s release never came.

The report indicated that Creighton’s family had hired private investigators — allegedly former agents of the US Federal Bureau of Investigation — before contacting the police.

CalvinAyre.com joins the rest of the online gambling industry in praying for Tony’s swift and safe return to his family.