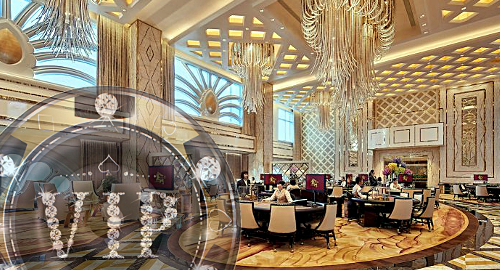 On Wednesday, GEG announced the debut of JinMen8, its new VIP gaming club at the top of the Ritz-Carlton hotel at Galaxy Macau. The opening has been three years in the making and the company claims to have spent MOP300m (US$37m) making sure there was exactly the right amount of gold leaf, marble and Ming vases lying about.

Over 200 GEG staff have been allocated to attend to the whims and needs of JinMen8 guests, including an “exclusively appointed Executive Chef,” who has no doubt spent the past three years force-feeding Beluga caviar to ducks and geese to create an even more expensive version of foie gras.

The new VIP area encompasses a main floor featuring 18 gaming tables at which the merely semi-rich can feel free to get their gamble on (maximum betting limit at these tables – HK$1.5m, around US$186k).

For gamblers with (for the moment, at least) a few more zeroes in the bank, there are also five gaming salons, two of which feature two tables apiece, while the truly crazy rich Asians will head straight for one of the other three salons, each of which contains only a single table (maximum betting limit – HK$3m).

JimMen is GEG’s in-house VIP brand, and it caters to ‘direct premium’ gamblers, to whom GEG directly extends credit rather than utilizing the services of a junket middleman. That spares GEG the pain of having to share a gambler’s losses with the junket but exposes the company to the full risk should that gambler prove unwilling or unable to honor his (or her) marker.

GGRAsia quoted Benedict Wan, GEG’s VP for international premium and mass market development, saying that the company planned an official launch party for the new club on Saturday. Wan said this would be the only in-house VIP expansion GEG had planned for this year.