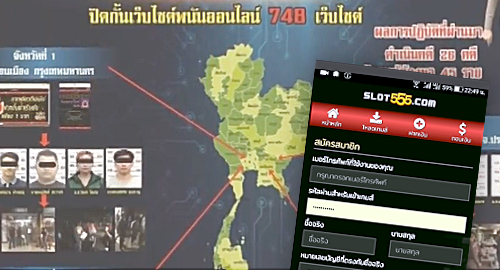 Thailand authorities have shut down a popular but illegal online casino site whose operations were spread across four provinces.

On Tuesday, police in Thailand’s capital Bangkok announced they’d shut down the Slot555.com online casino and arrested 11 individuals, including the alleged ringleader, one Wasan Kaosa-art, who now faces an eternity behind bars in this extremely gambling-phobic country.

Officers at the Huai Khwang Police Station, led by Pol Maj Gen Surachate Hapkarn, said Wasan ran the gambling site from a server based in Bangkok’s Bueng Kum district. Some Thai media reports referenced a ‘network’ of multiple gambling sites, although Slot555 was the only domain name cited.

The site reportedly had over 10k customers who lost BHT103m (US$3.2m) on its games. The money was funneled through multiple bank accounts listed under the names of members of Wasan’s family in areas outside Bangkok.

Money was transferred in and out of these accounts by one Chatchai Saengkaew, a programmer who Wasan hired to design the Slot555 website and handle the ring’s technical details. Chatchai has yet to be arrested, along with another five accomplices who are also still on the lam.

The site was promoted via Thai social media channels and often used photos of popular actresses to attract the interest of potential customers. Wasan and his partners in crime are facing charges of illegal gambling, money laundering and conspiracy.

Thailand was one of several Asian nations to participate in Operation SOGA VII, the coordinated crackdown organized by global crime fighters Interpol whenever there’s a prominent international football tournament such as the World Cup or the European Championship.

As part of its World Cup crackdown, Thai officials also reined in the online antics of so-called ‘net pretties’ who used their social media fame to promote wagering with illegal online sportsbooks.