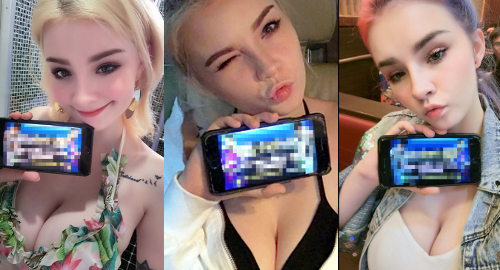 On Tuesday, the Dusit District Court of Bangkok sentenced six women for violating Section 12 of Thailand’s Anti-Gambling Act, specifically, for using their social media profiles to encourage Thai bettors to wager with online betting sites that have no authority to operate in the country.

According to the Bangkok Post, the six women received sentences of one month in prison – which was suspended for one year, pending good behavior – and fined the whopping sum of THB1k (US$30) each.

Among the women was 19-year-old Jessie Vard, who moved to Thailand from Donegal, Ireland when she was a child. In recent weeks, Vard’s Instagram feed deviated slightly from its traditional offering of “these are my breasts … these are my breasts from another angle” to include shots of her holding up her phone (close to her breasts, natch), on which online betting sites were displayed (pictured).

Last month, Thai authorities issued a public warning to social media stars who were using their profiles to shill for football betting sites, sometimes by writing the site’s domain across their cleavage. Last week, police claimed they had issued warrants for many of these so-called ‘net idols’ who failed to heed the warning, including the “infamous” Vard, according to the Royal Thai Police deputy commissioner.

The duck-faced top-heavy teen showed up at the police station on Tuesday to face the music. Vard told local media that she had no idea that her actions were against the law and claimed that she never met the individual who paid her to promote the betting site. Vard apologized for breaking the law and warned Thai youth not to engage in gambling during the World Cup.

Lest they be accused of sexism, it must be said that the Thai authorities’ crackdown efforts aren’t strictly focused on attractive females. Last month, a male sports writer received the same sentence as the girls for promoting gambling.

Thai police have been on a rampage since the World Cup kicked off last weekend, making over 3,000 arrests in the tournament’s first four days.