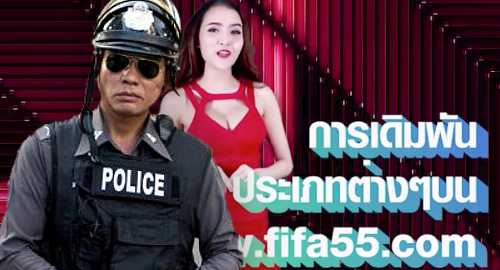 This week, Thai media outlets reported that local police have begun cracking down on so-called ‘web pretties’ aka pretty girls who are using the assets God gave them to promote illegal online betting sites to their social media followers. Depending on the media outlet, police have issued warrants for either 100 or 1,000 of these ‘pretties.’

The move follows media reports last month that the girls were writing the domains of online gambling sites on their cleavage or other desirable body regions, then posting photos or videos of themselves to their online profiles. One girl claimed to be earning up to $250 per week via these promotional activities.

The Bangkok Post, which reported the 100 figure, quoted Metropolitan Police Bureau deputy commissioner Phanurat Lakboon saying police would begin summoning girls next week, bringing them in 10 at a time for questioning and possible charges.

But Khaosod English quoted Deputy Police Chief Gen. Chalermkiat Sriworakan saying warrants had already been issued for 1,000 girls, each of whom could face up to one year in prison if found guilty of promoting illegal gambling.

Bangkok police arrested over 5k individuals involved in illegal betting during the 2014 FIFA World Cup and a pre-tournament crackdown that started May 1 has already resulted in the detention of 763 people.

Analysts at the Thai Chamber of Commerce recently estimated that the World Cup will generate economic activity in Thailand of THB78.3b (US$2.44b), of which THB59b will be derived from illegal wagering and other ‘undocumented transactions.’

To educate Thais on the evils of illegal betting, Thai authorities staged a bizarre football match involving local students and elephants decked out in World Cup team colors. Organizers said the match was intended to show Thais that football should be enjoyed purely for sport rather than as a wagering opportunity. A sweet, once-every-four-years wagering opportunity. And when opportunity knocks…