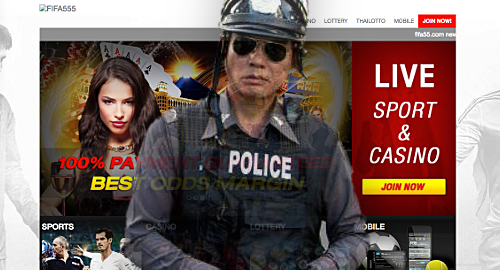 Police in Thailand’s capital Bangkok have made their latest online sports betting arrests, as the government frets over the expected betting tsunami during the 2018 FIFA World Cup.

On Sunday night, Thai media reported that Bangkok police raided a three-story house in a gated community in the eastern part of the city after receiving a tip that an illegal online gambling operation was being run out of the residence. Eight men were arrested and charged with organizing, promoting or coercing individuals to gamble.

The accused reportedly operated a network of football betting websites, all of them branded with some variation of FIFA’s name. The ring had reportedly been in operation for eight months, during which it handled monthly wagers of around THB15m (US$470k).

The ring reportedly had amassed over 900 monthly users and were adding more than 50 new users per day in recent weeks, according to Police Maj. Gen. Phanurat Lungboon. These registered bettors will be called in for questioning and could face their own charges if police don’t like their answers.

The NESDB said 4.6m Thai citizens – out of a total population of 69m – wagered during the 2014 World Cup, 2m of which were new bettors, and 500k of these new bettors indicated that they would continue betting on other matches after the quadrennial tournament concluded.

Thailand authorities were likely outraged by recent reports that ‘web pretties’ – pretty girls with large social media audiences – were promoting illegal betting sites by writing the URLs on their cleavage. A few of these girls are likely to join the bookies behind bars in the coming weeks.