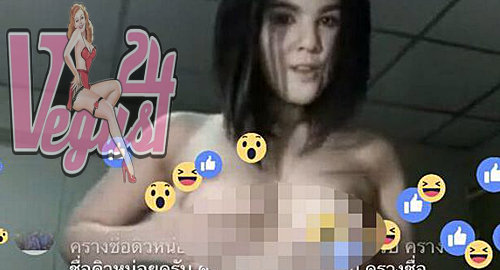 A Thailand online personality has been fined for taking her kit off on a Facebook Live stream to promote a gambling site.

Ponpan, who also goes by the name Mayple Pink Pink, appeared in the nothing-left-to-the-imagination striptease on February 6. The model’s bumping and grinding was sponsored by an unidentified online gambling site, which reportedly paid Pinky a whopping THB 3k (US $86) for the 30-minute video, which makes her something of a cheap date at less than $3 per minute.

As estimated 150k viewers tuned into the risqué video, which didn’t go unnoticed by local authorities and/or prudes. Thailand’s Technology Crime Suppression Division promptly leaped into action and arrested Ponpan, who confessed to all charges and was fined THB 500, which really demonstrates that crime (and sex) does pay.

A suitably chastened Ponpan, who reportedly makes her living by taking her clothes off in Bangkok adult venues and though online ‘product reviews’ – we imagine her reviews are along the lines of “I do not like these knickers. They are too tight and would look better on the floor.” – promised police that she wouldn’t appear nude online again.

Ponpan also apologized for “damaging the image of Thai women” and said she didn’t want other “net idol pretties and models to fall into the same trap as me,” at least, not for so small a payday.

Thailand is a deeply conservative country that takes an especially dim view of gambling, whether online or otherwise. The country’s only permissible form of gambling is the Thai lottery, which a majority of Thais find not worth playing due to its miniscule jackpots.