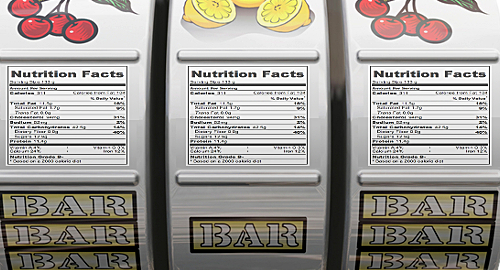 Ontario’s provincial gambling monopoly has tested ‘calorie labels’ on its casinos’ slot machines as a way to help consumers be aware of exactly what it is they’re consuming.

On Tuesday, the Waterloo Region Record reported on two University of Waterloo (UW) professors who created the equivalent of nutritional labeling for slot machines to educate gamblers on how the machines worked and hopefully reduce the prevalence of problem gambling behavior.

UW professor Kevin Harrigan says his mission is to “spread the word about how [slot machines] were designed,” in particular their use of lights and sounds to disguise losing spins as wins, as well as the increased use of the ‘near-miss’ phenomenon, in which the bars or icons almost line up to form a jackpot but not quite, leaving some players thinking they’re more likely to win on subsequent spins.

Working with his UW colleague Dan Brown, Harrigan created a slots version of the ‘Facts Up Front’ nutritional labels that offer US consumers the unvarnished truth of how much salt, sugar and fat they’re consuming.

The slots labels informed players on each machine’s payback percentage, the chance of hitting a bonus round, and the machine’s volatility. The latter category explains whether the game offers small but frequent payouts or whether payouts are few and far between.

The UW profs approached the Ontario Lottery and Gaming Corporation (OLG), which allowed the pair to install the labels on around 250 slots at the Grand River Raceway in Elora, Ontario. The profs then conducted a survey of players to determine what they’d gleaned from the experiment.

The survey revealed that players definitely felt more educated as to the mechanics of slots operation, but in the case of likely problem gamblers, this knowledge appeared to backfire, as these individuals actually gambled more, apparently in the belief that they now had something over on the machines.

Regardless, Sheona Hurd, OLG’s director of social responsibility strategy, felt the experiment was “very successful” in that it offers players the opportunity to better understand the machines they played. OLG intends to use customer feedback to tweak the labels and conduct a follow-up test later this year.