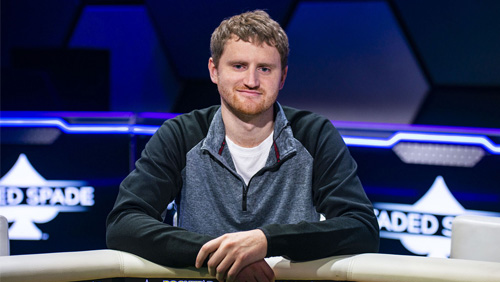 A round-up from the first two days of the 2018 Poker Masters including an opening day victory for David Peters in the $10,000 No-Limit Hold’em event, and Daniel Negreanu and Jason Koon star in the final table of the first $25,000 event.

Poker Central continued their goal to create a poker masterpiece for the ages when they hosted the 2018 Poker Masters. Once again the ARIA Resort & Casino will host the event, as it did in 2017 when Steffen Sontheimer became the first poker player to add a mannequin to his trophy room.

There are a few changes to this years offering.

Most disappointingly, Sontheimer won’t defend his jacket, after choosing to stay at home.

“I don’t think it’s the best value of the year and I have private things during that week that I value a lot,” Sontheimer told me in a Whatsapp exchange. “So I decided to skip and watch some of the streams. I’m a bit sad for sure, but I’m happy with my decision.”

So we will have a new champion.

There will also be two new variants with the addition of a $25,000 Pot-Limit Omaha (PLO) event, and a $10,000 No-Limit Hold’em Short-Deck event, increasing the event size from five to seven.

Finally, the winner of the most money will not win the Purple Jacket. Instead, Poker Central and the ARIA will apply points depending on ITM finishes, and the person with the most wins the title.

The opening event was the smallest buy-in event of the lot. The game attracted 69 entrants, and when the smoke cleared, David Peters was the man standing alone with a bazooka resting under his hairy pit.

Peters began the final table third in chips, but played and ran well enough to finish on top.

He took the lead early doors after doubling through Rainer Kamper JJ>88 and then crushing the soul of Cord Garcia when his A2hh beat the pocket eights of the Colossus winner, with Peters hitting a Broadway straight on the turn.

Peters then eliminated the overnight chip leader, Brandon Adams, brutally. The pair got it in with Peters behind holding QdJh against KcJd only for Peters to hit runner-runner cards to nail an unlikely flush, and Peters’ heads-up clash with Brian Green arrived after another ugly elimination.

Kempe got it in good with pocket eights against the deuces of Peters, only for the former Global Poker Index (GPI) Player of the Year to once again hit runner-runner cards to score the knockout with a four-card flush.

The tale of the tape had Peters in the dominant position, but Green made it a decent fist fight when he doubled up three times to bring his unshaven chin level with that of Peters.

And then Peters found the winning hand.

Green moved all-in holding pocket eights, and Peters looked down to see two kings smiling back at him.

All the chips went in.

Green never felt a single one.

There is no rest for the wicked or wonderful in the Poker Masters.

Here are the payouts.