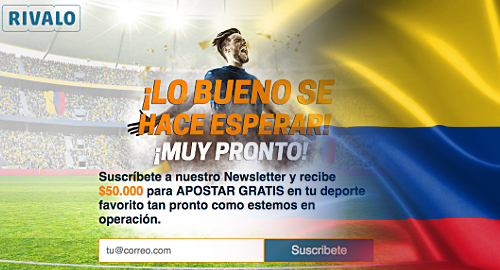 On Thursday, Colombia’s Cojuegos gambling regulatory body announced the issuing of its 13th and 14th online gaming licenses to Alfabet SAS and Teclino SAS, who will operate online via the Betalfa.co and Rivalo.co domains, respectively. Each of the licenses is valid for an initial three-year term.

Alfabet is a domestic firm based in the city of Cali, but that’s about all the information that can be publicly gleaned about the new licensee. The company’s website currently displays a ‘coming soon’ message, complete with dummy text that literally reads “authorized and regulated by dummy text.”

Teclino is a subsidiary of Curacao-licensed online gambling operator Matchserv Solutions, which also operates internationally via its Rivalo.com and Rivalo188.com sites. Like Alfabet, Teclino’s Colombian site is equally not ready for prime time, containing only a message that ‘good things make you wait.’

Coljuegos president Juan B. Pérez Hidalgo celebrated the regulatory body’s latest graduates, saying that the “clear regulations and guarantees” offered by Coljuegos had made Colombia an attractive offer for international gaming operators looking to establish a beachhead in South America.

Hidalgo repeated his belief that Colombia will have 17 online licensees by year’s end. One of these may be Sun Dreams, the Chilean offshoot of South Africa’s Sun International, whose general manager said in June that his group expects to launch before 2017 is in the books.