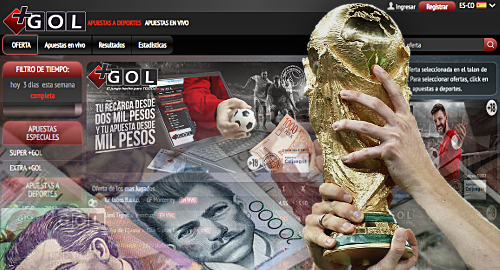 Colombia’s online gambling sites handled nearly $63m in wagers on the 2018 FIFA World Cup, according to the local regulatory body.

Coljuegos president Juan B. Pérez Hidalgo said that the average online bet placed during the tournament was COP13,000 ($4.70), which seems impossibly miniscule, but the monthly minimum wage in Colombia is only about $265, and the average World Cup wager was more than twice the size of the average bet placed in the period spanning January to May.

Coljuegos requires its betting licensees to pay out a minimum of 83% of turnover to their customers. The average monthly payout to punters from all Colombian betting sites in 2018 was $33.6m but this sum increased by over 56% during the World Cup. The biggest individual payday issued by a Colombian site during the tourney was $12,200.

Similarly, Colombia’s licensed gambling sites had registered an average of 129,530 players per month through January to June, but an additional 329,366 players opened new accounts during the month-long event.

The World Cup match that attracted the most wagers was Colombia’s ’round of 16′ tilt against England, which drew over 600k individual bets worth a combined COP5.5b ($1.85m). All told, Colombia’s four matches attracted 1.14m wagers worth just under $3.9m.

Hidalgo somewhat wryly notes that the home side enjoyed strong betting “optimism” during the tournament, but bets on the Colombians to lose increased as the tournament progressed.

Colombia became the first South American jurisdiction to legalize online gambling in October 2016. Coljuegos issued its latest online gambling license to Royal Betting Solutions in July, making a dozen licenses that the regulator has issued since the first license was issued in June 2017. Hidalgo has stated his aim of having 17 online licensees taking bets before the year is through.