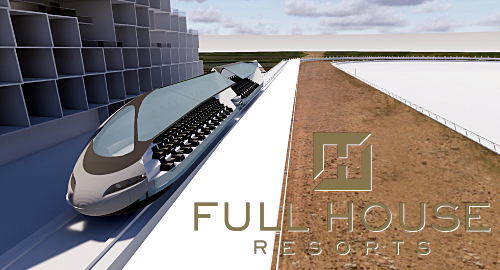 On Monday, FHR unveiled its proposal for a $200m destination resort in New Mexico the company has dubbed La Posada del Liano (“The Inn on the Plains”). The company has optioned 520 acres of land east of the city of Clovis on which it hopes to build a racetrack, 35k-square-foot casino, luxury hotel, 18-hole golf course, water park and other amenities.

So far, so standard, but FHR has brought the ‘wow’ – or, depending on your perspective, the ‘wtf’ – through what it calls a Moving Grandstand (pictured). In short, it’s a portion of the racetrack’s stadium seating that will be mounted on rails and will move in tandem with the horses during races.

FHR CEO Daniel Lee said typical racetracks offer grandstand viewers only “two brief moments of a race – its start and the closing seconds at the finish line.” The Moving Grandstand will allow spectators to “race side-by-side with the horses for every dramatic second,” an innovation that Lee predicts will “open horse racing to a new generation of fans.”

Frankly, given the speed with which the average race is conducted, and the volume of alcohol consumed at racetracks, Vomit Comet might be better branding for FHR’s new gizmo, but hey, that’s why we’re not in the resort development biz.

Lee maintains that the proposed resort’s offering will “attract a broad range of guests,” which will hopefully lower the average age of the people in the grandstand, which earlier this decade was around 51 years.

The resort also plans to offer a sportsbook, which is somewhat aspirational, given that New Mexico has yet to join the flood of states seeking to take advantage of the US Supreme Court striking down the federal betting ban. But FHR doesn’t expect to open its resort for another two years, so lots of time to cross that bridge.

FHR currently operates gaming venues in Colorado, Indiana and Mississippi, plus two casinos in its home state of Nevada. Earlier this month, FHR reported second quarter revenue up 2.8% to $41.2m, adjusted earnings up one-fifth to $4.4m while shrinking its net loss to $700k from $1.5m in the same period last year.

Is The US Gambling Market Saturated?
Vince Martin
11 October 2013
.