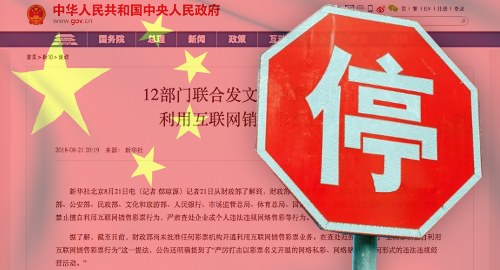 China’s government has issued a public reminder to all and sundry that online lottery sales are, for the time being at least, strictly illegal.

On Tuesday, 12 Chinese ministries and commissions issued a joint communiqué “resolutely prohibiting the unauthorized use of the Internet to sell lottery tickets” while vowing to “seriously investigate and deal with corporate or personal illegal and illegal online sales.”

The 12 government bodies that signed on to the announcement include the Ministry of Finance that oversees lottery operations, the People’s Bank of China as well as the feared Ministry of Public Security.

The government plans a “three-dimensional remedial action” that tasks the Ministry of Culture and Tourism with policing the “unauthorized use of online sales in online games,” while banking officials will monitor “the provision of payment settlement services” to unauthorized lottery operations.

The third dimension of this plan requires telecom operators to “clean up the illegal information on the Internet” regarding illegal lottery and gambling activity. Failure to do so in a timely manner will prompt the responsible authorities to “implement the closure of the website according to law.”

Furthermore, individuals or entities caught engaging in or facilitating illegal lottery activity could be accused of “serious acts of dishonesty,” requiring the relevant department to “implement joint punishment according to law.”

The announcement comes one day after tech giant Apple confirmed that it had purged thousands of gambling and lottery apps from its China-facing App Store after coming under criticism from state-run media.

China never formally authorized online lottery sales, but did permit two companies to participate in an online sales ‘pilot program.’ That program came to a screeching halt in March 2015, when China imposed a ‘temporary’ suspension of online sales that has yet to be lifted.

The 2018 FIFA World Cup brought a new wave of unauthorized sports lottery pools to China’s walled-off internet, including on major social media platforms such as Tencent’s QQ messaging service, prompting much furrowing of brows in Beijing.