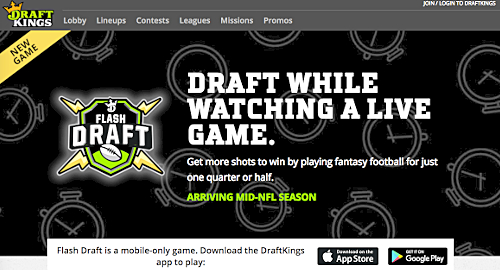 While most of the DraftKings news these days surrounds its rapid rollout of new single-game real-money sports wagering, the company hasn’t forgotten its fantasy roots. This week, the company announced the imminent arrival of quasi in-play DFS via its new Flash Draft product.

Flash Draft, which expects to arrive on users’ Android and iOS mobile devices midway through the upcoming NFL season, will allow players to pick athletes they believe will score the most points in quarters 2, 3 and 4 of NFL games, plus a separate contest covering the game’s second half.

These drafts are done live, starting 30 seconds after the conclusion of the previous quarter, and consist of five rounds apiece. Players have only 15 seconds in which to select one of three players they believe will produce the most points in a given quarter. The contests have guaranteed prize pools, but the more players that participate, the higher the potential bonus.

Having already launched its DraftKings Sportsbook app in New Jersey – the first such betting app in the US outside Nevada – the company is preparing for the expansion of legal wagering by establishing branch offices outside its Boston headquarters.

NEW DIGS, NEW FACES
DraftKings announced this week that it had opened an office in San Francisco and has plans to open another office in Las Vegas. The San Francisco office team will focus on developing the company’s marketing efforts to further drive customer acquisition.

Sean Hurley, who was hired in February as DraftKings’ first head of sportsbook, is now head of commercial growth. Having helped DraftKings achieve its New Jersey ambitions, Hurley will now work with DraftKings’ biz-dev team in New York City.

DraftKings is currently creating a massive new Boston HQ to accommodate the expected 75% growth in its Massachusetts workforce over the coming year.