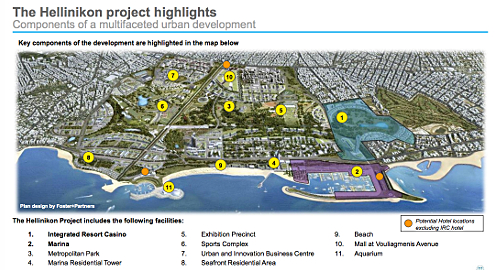 Greece could begin the tender for the country’s first major integrated resort casino in September, while dodging old claims of illegal state aid to government-run casinos.

Last week, the Hellenic Gaming Commission (HGC) announced the launch of a public consultation on the terms of the sole casino license at the proposed €8b integrated resort at Athens’ former Hellinikon airport. Interested parties have been asked to submit their comments and proposals before September 10.

The Greek regulator has been under pressure to commence the tender, given the government’s expectations for the mammoth project’s ability to jumpstart the country’s ailing economy. It’s been four years since an international consortium signed a 99-year land lease and the government is itching to realize the thousands of jobs the project is expected to create.

Progress on the resort, which will include hotels, theme parks, conference and exhibition facilities and a whole lot more, is also a key condition of the government’s ongoing financial bailout from the European Union and the International Monetary Fund.

To date, Europe lacks a major integrated resort, although Melco International Development is in the process of building its €550m City of Dreams Mediterranean venue in Cyprus, which expects to launch its first phase by 2021. Hard Rock International is also planning a €2b Hard Rock Entertainment World project in Spain that aims to be fully complete within five years.

Greece currently has nine operational casinos, and plans are afoot to authorize three additional casinos on the islands of Crete, Mykonos and Santorini. These venues rely primarily on a local clientele, but the government hopes the new resort will give international tourism the necessary kick in the rear.

Greece recently approved legislation that introduced a sliding tax scale, starting at 20% on annual revenue up to €100m, falling incrementally to 8% for revenue above €500m. Annual license fees are 1% of gross gaming revenue, plus a 2% municipality tax.

ILLEGAL STATE AID? WHATCHA GONNA DO…
Meanwhile, the European Commission (EC) has dropped its investigation into whether the Greek government’s selective implementation of casino entry fees constituted illegal state aid. The case dates back to 2011, when the EC criticized Greece for requiring private casinos to charge higher entry fees than state-owned casinos.

The EC originally ordered Greece to repay the difference to the private casinos, but this decision was overturned in 2014 and upheld by the European Court of Justice after the state imposed a uniform entry fee. The EC now says it has closed its infringement procedure against the state, in keeping with its newfound disdain for sullying its hands with gambling-related issues.