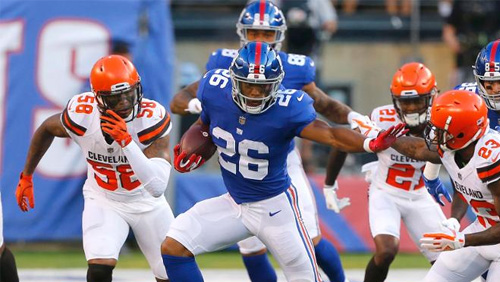 New Jersey sports fans got their first taste of regulated mobile wagering while watching the new-and-improved Cleveland Browns demolished the New York Giants during their NFL preseason debut at MetLife Stadium on Thursday.

The Browns-Giants clash was one for the books for two reasons. First, NFL’s top two overall picks in the 2018 draft, Baker Mayfield and Saquon Barkley, made their league debut. Second, the match was also considered to be the first NFL game to provide an opportunity for New Jersey’s regulated mobile sports wagering.

ESPN’s Ben Fawkes described the festive atmosphere inside the Meadowlands Racetrack, located a stone’s throw away from MetLife, as punters watched the duration of the Giants-Browns match in one of the six big televisions inside the FanDuel sportsbook.

Punters are allowed to place their bets before the game, along with a halftime line, according to FanDuel.

FanDuel’s perennial fantasy sports rival DraftKings, likewise, has entered the regulated U.S. sports wagering market. DraftKings recently launched its mobile betting app, allowing anyone in the Garden State to place their bets without traipsing down to a retail sportsbook.

The sportsbook reportedly provided some transportation that will shuttle sports fans and punters to and from MetLife Stadium. Unlike FanDuel, DraftKings allowed in-game wagering until in the late fourth quarter and it didn’t place restrictions for mobile betting at MetLife.

Under West Virginia’s law, bookmakers may only accept bets from persons that are physically in the state. GeoComply’s geolocation solutions will ensure that operators follow the law.

“We are now ready to supply compliance-grade geolocation solutions to the local operators and partners in West Virginia to get online sports wagering up and running in the state,” GeoComply Solutions CEO David Briggs said in a statement.