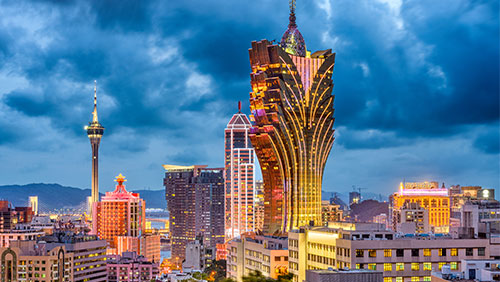 The good news is that the total market value for the six casino operators in Macau is predicted to hit $146 billion by 2020. The bad news is that there could be a number of disruptions due to the city’s license bidding process and competition cropping up out of Japan and China.

According to Morgan Stanley analysts, the market value could increase by as much as 24% within two years. The value is currently around $118 billion and will increase as a result of an expected compound annual growth rate (CAGR) of 13%. Key disruptions, though, are still a major concern and the analysts warn that there is a downside of as much as 41% on their base estimate for 2020, and as much as 27% on the current $118-billion market cap.

Two of the six casino operators—SGM and MGM—will see their licenses expire in 2020. The other four—Melco, Wynn, Galaxy and Sands—will be set to renew their licenses two years later. Some anticipate that SJM and MGM could receive two-year extensions so that all six are positioned for new licenses at the same time. However, there are still doubts regarding the licensing renewal process, which could cause headaches for both operators and gamblers in 2022.

The Morgan Stanley analysts said, “In case of license renewal, it could either have a negative monetary impact or outright loss of gaming profit.”

License renewal procedures have already made their way to the hands of legislators in Macau, in an apparent attempt to be proactive and prepare for the license renewal process. Many have argued that there does not exist a true “renewal” system for the licenses, as all operators are, under currently guidelines, going to have to rebid for their positions in the market.

There is also a perceived competitive threat beginning to gain traction in other Asian areas. Japan and Hainan are reportedly going to be strong competition for Macau, more so than other locations such as Singapore and Manila. “Competition from ASEAN [the Association of Southeast Asian Nations] gaming destinations has grown, yet the market remains too small compared to Macau. With the potential opening of Japan and Hainan, the pie could shrink meaningfully,” the analysts explained.