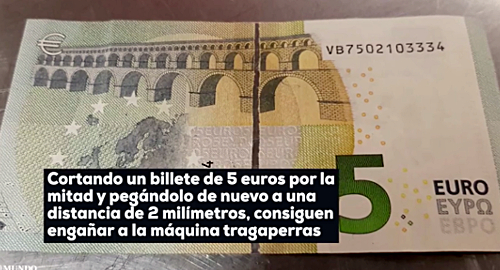 An unknown number of Chinese scammers are reportedly picking the pockets of Spanish slot machine operators through the use of altered €5 bills.

On Thursday, Spanish newspaper El Mundo reported that police in Madrid had detained “several citizens of Chinese nationality” for their apparent involvement in a scam that uses doctored €5m notes to trick slot machines into spitting out €50 notes in return.

Apparently, the scam involves cutting a €5 note in half vertically, then taping the two halves together but leaving a small two- or three-millimeter gap in between. The doctored bill is then inserted into the currency slot of an electronic gambling machine, which spits the note back out as unacceptable.

The perpetrators then reinsert the doctored bill multiple times, after which, for reasons that aren’t particularly clear from El Mundo’s article, the machine’s account balance suddenly changes to read €50. The scammers can then request a withdrawal of the full amount, leading the clueless machine to spit out a €50 note, after which the scammers presumably move on to their next hapless electronic victim.

Madrid police have alerted bar and gambling hall operators in the area to check their machines for the doctored notes, and to be on the lookout for other potential scammers that may or may not be connected with the individuals already detained.

It’s unclear at this point whether the scam works on a particular make or model of gambling device, or whether all machines are similarly liable to make it illicitly rain. Among the slots depicted in El Mundo’s video are Aruze Gaming’s Ultra Stack Feature Panda and Merkur’s Tropical Heat.