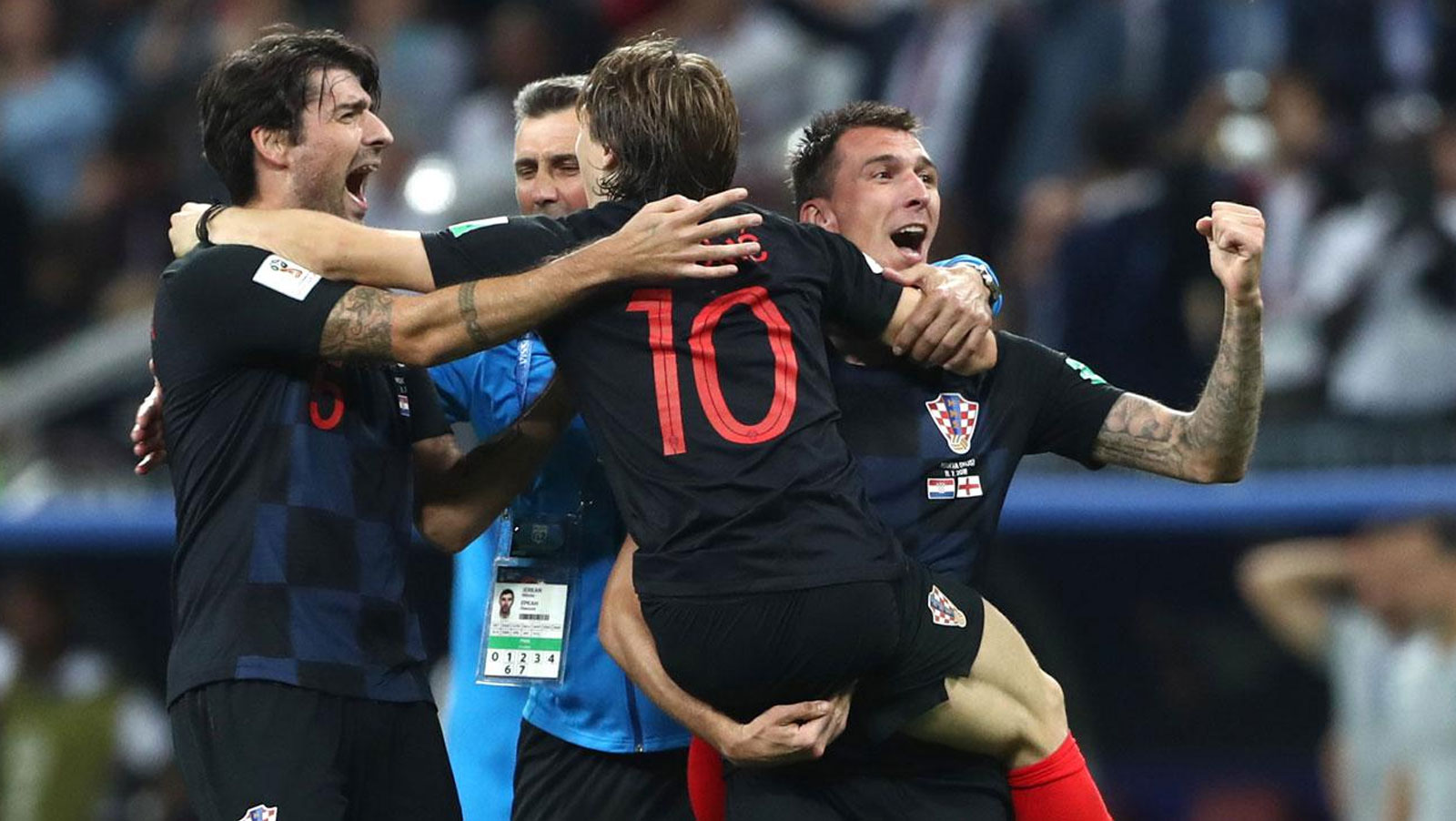 Another round-up from the World Cup in Russia, this time focusing on the semi-final between England and Croatia to see who goes forward to face France in Sunday’s final.

In 1990, after England had lost to Germany in the Semi-Finals of the World Cup, I walked into my next door neighbours house to wait for my friend to don his nines.

My friend’s mother, Anne, hugged me.

“Maybe they can win it next year?”

28-years later, and here I am, sitting in the Glassblower, waiting for my vegan fish and chips, drinking sparkling water, a seat in front of the big screen. There’s a couple in their 60s wearing England tops from generations apart. The place fills up quickly. There are more English fans than English haters, a nice change in this part of the world.

A guy asks to sit next to me.

The only time I speak to him is in extra time when Croatia take off Ante Rebíc, and he turns to me and says, “About fucking time.”

But extra time is a world away.

Let’s start at the beginning.

Gareth Southgate named an unchanged lineup for the third consecutive competitive game. It’s a move that’s unheard of, but one I have been championing for many years – until now.

You don’t need to be Sir Alex Ferguson to see that unity and cohesiveness are essential attributes in a competition like the World Cup. Pick a starting lineup, and if they win, stick with it to gather momentum. And that’s what Southgate did, and it seemed to work as England made their first major Semi-Final appearance since Euro 96.

I thought it was a mistake.

Pick up any self-help book, and what you have are a few critical concepts. But if the writer were only to deliver the concepts there would be no book. It would be a message on a Post-It Note. So the writer adds 70,000 of padding; words that do very little except fill in the space around the concepts.

The Manchester United sub hasn’t had a good game all tournament. Young offers nothing to this team, on the pitch, despite his leadership qualities away from it.

Young’s inclusion in the team leaves England extremely narrow, and for some reason, it affects the usually adventurous Trippier, who has also hemmed his raids this tournament.

Two other people need to be singled out.

Raheem Sterling has been as annoying as the cables on analogue telephones. What a year for the lad to turn talent into a tangible product scoring 18 goals for Manchester City. He looked like a world beater. And yet, for England, despite terrorising defenders with his pace, his end product has been sorely lacking. I would have begun with Marcus Rashford and had Sterling in reserve.

And Dele Alli has not had a good tournament. When the Spurs man missed a few matches through injury, Ruben Loftus-Cheek replaced him and looked strong, adventurous and full of beans. I would have stuck with the Chelsea midfielder as Alli was clearly off the pace in the previous two knockout games.

But here we are.

22 players each waiting for the countdown.

You can see how much this means to each of them as the camera picks a few out of the field.

My new buddy goes to the bar to get another pint.

A goal within five minutes and the place erupts. It’s so comforting to be in the midst of people who want your team to do well, living in this most English centric xenophobic of nations.

Luka Modric brings down Dele Alli outside the box, and Keiran Trippier becomes the first England player to score directly from a free-kick after David Beckham in 2006, his first goal for anyone in two years.

After ten minutes, you can sense that England is well up for this. The Croatian players are like mail carriers running around in a hurricane trying to gather up letters desperate to remain unread.

15-minutes in and Trippier delivers a pinpoint corner, and Harry Maguire crashes his header wide. England look likely to score at every corner, with John Stones and Maguire majestic in the air.

Then Croatia reminds us that they have at least one player worth a few bob. Ivan Perisic sending a long range daisy cutter wide of the mark. But it was a moment entirely against the run of play.

Jesse Lingard puts Harry Kane through on goal. Four yards out, with only the keeper to beat and the usually assured Spurs striker, shoots tamely into the broad frame of Danijel Subašić and then squirms the rebound against the post.

England is in the supremacy.

The only player who is not on point is my friend Young, who is continually giving the ball away.

Five minutes after the Kane chance and England break again. The Lions roar down the pitch, Kane peels the ball back to Lingard at the edge of the box, and the Manchester United youngster passes the ball wide.

The word ‘rue’ springs to mind.

Jordan Pickford, Kyle Walker, Maguire and Stones play ceremonious football at the back. I have never seen an English backline look so sublime, yet my buddy and I keep screaming –  ‘boot the fucking ball up the field’.

Ever the English purists.

The half-time whistle blows. It’s England’s best performance of the tournament. Croatia looks like they’ve just fucked the next door neighbour’s wife while the drunk husband sleeps downstairs, fortunate that he never woke up.

Roy Keane nailed it at halftime.

“They will kick themselves if they don’t get the job done. This Croatia team are all over the place.”

There’s a Wee Willie Winkie feel about the first ten minutes, in stark contrast to the hustle and bustle of England’s first-half performance. In the first half the England side looked like untameable big cats, and now they’re lying on their back wanting their tummies tickled.

Then in the 55th minute, Trippier volleys the ball of the tournament into the six-yard box, only for Dejan Lovren to beat Kane to the ball to knock it out for a corner.

15-minutes pass and Croatia are bossing this thing, but offer no threat up front. I begin thinking that England is going to pull off a France. Take the lead, sit back, and hole up. But we aren’t organised enough. Kane and Sterling are not filling in like Griezmann, Giroud and Mbappe; Lingard and Alli are not compact.

68 minutes and the moment every England fan expected. Perisic stole a march on Walker and volleyed home to even the game up. Three minutes later, and Perisic struck the post after a defensive cock-up.

England looked out of breath and out of ideas.

Croatia controlled the football for the first time since beating Argentina in the group stages.

Rashford comes on for Sterling.

Kane puts Lingard through on goal, but he shoots wide.

Pickford doesn’t deal with a high ball, and Perisic skies it with the goal at his mercy. 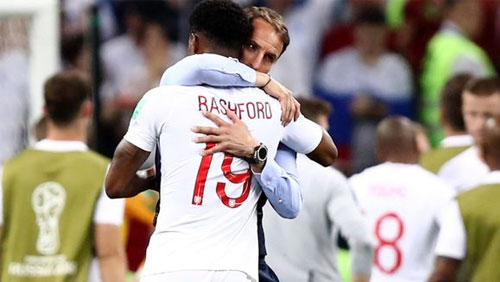 Ashley Young comes off, and Danny Rose comes on. Within two minutes, Rose makes more advanced movements than Young made in the entirety of the tournament.

8-minutes into the extra period and Stones leaps imperiously in the box to head a corner goalwards only for a Croatian defender to clear his lines.

Kamaric comes on for the aggressive, horrible, pain in the arse Rebic, and my buddy and I exchange pleasantries for the first time.

And then in first-half injury time, Perisic squares for Mario Manduzkic, and Pickford pulls of a Schmeichelesque star save from the six-yard box.

Two minutes into the second period and England fall to sleep during a corner. Modric gives the ball to Marcelo Brozović, only for the substitute to smash it over the bar.

And then one minute later, it happened.

Kyle Walker hoofed the ball into the air when trying to clear. his lines A Croat beat Trippier in the air, and Mandzukic stole a yard on Walker and scored from six yards.

And you knew that was it.

It was all over.

The big difference between this defeat and the one in 1990 was the manner in which we went out. Back when I was a 15-year-old, England dominated the latter stages of that game but still lost. Tonight, England lost against the better side, and that hurts, because going into the game, Croatia looked anything but a decent team.

England plays Belgium in a dead rubber on Saturday to determine who finishes third.

Croatia goes on to play France in the final on Sunday.

I’m going to wait for the next 28-years to pass.