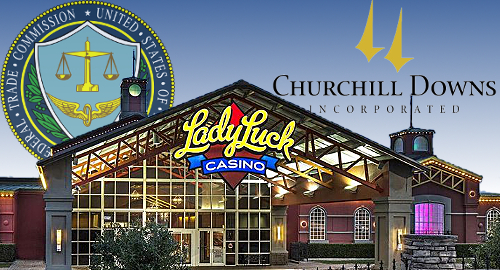 Gaming operator Churchill Downs Incorporated (CDI) has backed out of a deal to purchase a Mississippi casino after federal regulators expressed competition concerns.

In late February, CDI announced a deal to buy two gaming venues – the Presque Isle Downs & Casino in Pennsylvania and the Lady Luck Casino Vicksburg in Mississippi – from Reno-based Eldorado Resorts Inc (ERI). However, the $50m Vicksburg portion of the deal is now off the table after the Federal Trade Commission (FTC) expressed interest in the exchange.

On Monday, CDI announced that it had “terminated” the Vicksburg acquisition and will pay ERI a $5m termination fee, as stipulated in the parties’ acquisition agreement. The termination came after the FTC requested more info from both parties to ensure the deal didn’t violate the Hart-Scott-Rodino Antitrust Improvements Act of 1976.

CDI says it and ERI mutually decided to terminate the Vicksburg deal based on “consideration of the time and expense needed to reply to” the FTC’s request. CDI already operates two Mississippi casino properties, including the Riverwalk Casino Hotel in Vicksburg, which CDI acquired in 2012.

The Vicksburg deal termination led to a new deal under which CDI will pay $100k to assume the rights of an ERI affiliate to operate the Lady Luck Casino Nemacolin in Farrington, Pennsylvania. The Presque Isle Downs acquisition is contingent upon this Nemacolin deal meeting no objections from the FTC or from Pennsylvania gaming regulators.

The Nemacolin venue is the Pennsylvania market’s lesser light, ranking dead last in terms of slots and table game revenue among the state’s current 12 casino licensees.