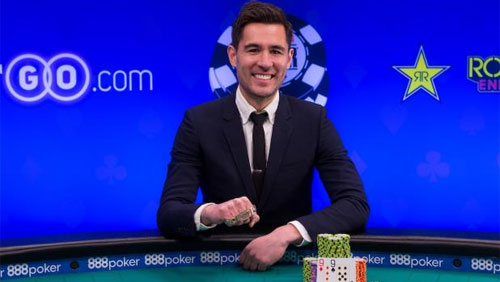 Another round-up from the World Series of Poker this time focusing on victory in the Crazy Eights bracelet event for the former PokerStars Caribbean Adventure Main Event winner, Galen Hall.

The first time Galen Hall won a live poker tournament, he wasn’t messing around. It was back in 2011 when poker was as lively as a honeycomb in bee season. Hall defeated 1,560 entrants to win the PokerStars Caribbean Adventure (PCA) Main Event for $2.3m.

Put on your skis lad; it’s all downhill from there.

No skis required. You only have to look at Hall to realise he dodged the shoeshine boy genes. Good looking, charming, intelligent – Hall even wears a mean suit.

It took him seven years to win his second live poker tournament, not because he’s incapable of winning them; it’s just that he rarely plays them preferring to sit by the river watching Swans gliding along, tickling his girlfriend with the point of a feather or dreaming up the next big startup.

The man I would allow to marry my daughter has cleaned up in Event #62: $888 Crazy Eights No-Limit Hold’em 8-Handed. The four-starting flight event was a phenomenal success, with 8,598 entrants voting with their $888 that this should be a staple part of the World Series of Poker (WSOP) diet moving forward.

The event came about courtesy of the WSOP’s relationship with 888Poker.

The number eight has particular significance if you happen to be Asian. The snowman signifies wealth, fortune and prosperity. (The 2008 Summer Olympics in Beijing began on the 8/8/8 at 8:08:08 pm.)

Hall’s mother, who is Asian, was on hand to see her son add to his wealth, fortune and prosperity after picking up $888,888 for the win, his second most significant score to date.

The serious business began on Day 2.

By the end of the day, only 29 players remained, and Hall was in charge. The Brits were doing well with Paul Vas Nunes, and the 888Poker Ambassador Chris Moorman in the mix and Men ‘The Master’ Nguyen was looking for bracelet number eight.

The action should have ended on Day 3, but the Tournament Director called time on the action when three-handed, much to the chagrin of Hall, who, with the ascendency, wanted to play till a finish.

The decision to call time meant the final three would take the following day to compete in the Main Event before returning for an unscheduled Day 4 the next day.

Any hopes that Niels Herregodts and Eduards Kudrajavcevs had that the delay would hurt Hall were misplaced. He returned to eliminate Herregodts AK>44, before making short, sharp and shrift work of Kudrajavcevs during heads-up.

It was over in six hands.

The pocket nines of Hall avoiding the two overcards of the Latvian (JT) to justify his parent’s and girlfriend’s goosebumps on the rail.