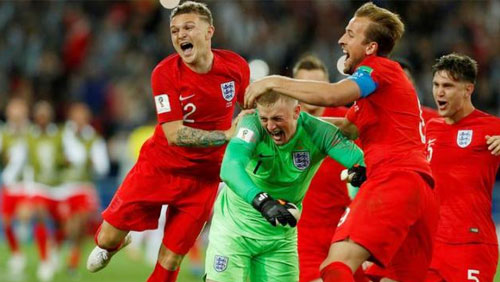 Another round-up from the World Cup in Russia as Lee Davy shares his experience of watching England beat Colombia on penalties in a Cardiff pub.

Had I lived in the Apartheid era of South Africa, they would have labelled me ‘coloured’ thanks to my Hong Kong father sent to prison for armed robbery long before I came into this world in a vernix covered victory.

Maybe that’s why I had to restrain the Hulk last night?

Liza suggested it would be crazy to pay for a babysitter while I watched England play Colombia in the Round of 16. There are many nuances you have to get used to when you live in the UK and marry someone from the USA.

For one, you have to keep reminding them that when our children go to school, there is little likelihood that someone will march in armed like Rambo.

When the earth moves, it’s sex.

And you are more likely to get punched in the face by a drunk nun than evacuated from your home because of a forest fire.

But the one that always gets me is the lack of understanding that my dearest has for how important the World Cup is.

It’s life and death, and I can’t watch it with a 21-month old baby jumping all over me.

So I went to the pub, which for me is like a Mastrophobic walking into a mummy and toddler group when the toddlers are all gagging for some Mama.

I wasn’t alone. I took my 17-year-old boy for company. The Colombians had the numbers. An ITV Field Reporter outside the Spartak Stadium couldn’t find anyone English enough to talk to as a field of gold swallowed her like that greedy dwarf in The Hobbit.

We hadn’t won a knockout game since 2006, when, incidentally, our opposition wore gold. It was an opportune moment to give my son a lesson on ‘Expectations.’

“So, you’re expecting us to lose?” Asked my puzzled boy.

We dig into some vegan fish and chips, and sup on some sparkling water while watching the build-up so close to a giant screen our necks ache before the first ads. A lad from Birmingham sits in front of us. A builder. Another four join him.

The game kicks off.

When you don’t drink alcohol, you can see how quickly an environment can change from a fun, loving place, into a dungeon where everyone wants to torture people.

Dele Alli looked well off the pace, and a poor second rate Ruben Loftus-Cheek, but other than that, we seemed in control. My subconscious kept telling me to change my expectations. I told it to fuck off.

Then came the incident where Wilmar Barrios should have been sent off. I wasn’t a fan of the way Jordan Henderson fell to the floor. But it was a clear red card for violent conduct.

The Brummies bayed for blood.

Not one of them was watching the game by this point. They kept nipping out for a few fags, and I caught two of them going into the toilet stall, leaving without washing hands, fingertips coated with dandruff.

Then came the stupid foul by Carlos Sanchez.

Seriously, I think some of these defenders have been snorting the same stuff as the Birmingham Five.

Now, more than ever, you are fortunate if you get away with a man-hug in the box. Referees continue to warn players, and yet they still do it. The outcry from the Colombians after referee Mike Geiger pointed to the spot was incredulous, and his handling of the affair, weak and pathetic. As they stamped all over the penalty spot in a classic show of South American sportsmanship, the American ref failed to stamp on anything. It would be his undoing as the Colombians hounded him throughout the game.

The Birmingham Five jumped up.

I jumped up in a strange Neo way avoiding a stray pint of lager that ended up drowning the poor lad next to me.

It was Kane’s third penalty of the World Cup, and each one of them inch perfect. It’s the first time that an Englishman had scored in six consecutive internationals since Tommy Lawton in 1939, and thrust Kane as the 1/4 favourite to win the Golden Boot with his six goals.

Kane was brilliant all match, dropping deeper to help the lads out, leaving Raheem Sterling to roam around doing fuck all up front. The Colombians kicked lumps out of him (drawing nine fouls), with Barrios’s legs, elbows and head locked onto Kane like guided missiles.

14 goals in ten matches under Southgate.

As the game entered the final ten minutes, the Colombians marched forward. One of the Birmingham Five, eyes gone, began banging the table with his fists.

“Black bastards!” He kept wailing, which I thought was a tad odd as most of our team was the same colour.

But despite the Colombians pressing, we looked strong at the back.

Those expectations began to grow.

Too short to be a keeper, my arse.

The corner came in.

We were still talking about Pickford’s magical save when Yerry Mina rose higher than anyone and headed into the goal. It was the 93rd minute. My first thought was, “Who decided it would be a good idea to put the munchkin like Keiran Trippier on the post,” followed by, “Fuck, we’re going out.” 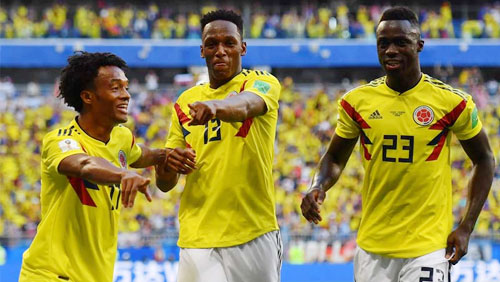 When the Colombian goal went in, the place erupted; strange when you consider we were in Cardiff. My barista, Joanna, is from Colombia, but I doubt there are too many here from her homeland.

Those cheers were from the Welsh.

One Welshman called one of the Five an English cunt.

My boy moved seats, preferring to sit behind me, away from what was turning into a cauldron of testosterone and Tennant’s Extra.

I remember Juan Cuadrado skying one over the bar after a screw up by Kyle Walker, and Eric Dier missed a sitter, heading over the bar from eight yards, but it was always going to penalties.

“What happens now?” asked my boy.

“This is where we lose.”

Only once have I seen England win a penalty shootout. 1996 against Spain. Many times, I have seen them lose (six in total). Losing at penalties was as English as the queen.

You sensed that this was a crucial moment in English football. I mean, they all are, but this young team was under a psychological strain never before experienced. A win could send them to greatness. A loss would see them lament a lost opportunity for the rest of their lives.

This set of players would never get a better opportunity to win a World Cup.

Radamel Falcao steps up and smashes it home.

Cuadrado bangs it into the top corner.

Marcus Rashford does the same, only low.

Luis Muriel looks supremely confident as he passes the ball into the back of the net.

And then, up steps, Jordan Henderson.

Daniel Ospina flies to his left to push the ball outside of the post.

We are going to lose again.

Mateus Uribe puts the ball onto the white stuff.

“Jesus, he doesn’t look confident,” I tell my boy. He hits the bar.

And then it’s Carlos Bacca’s turn, and Pickford pulls off an incredible one-handed save.

We all go nuts.

And then utter silence.

Eric Dier to win it for England, and for a moment it looks like Ospina has reached it until the net bulges.

Everyone leaps up and down. I’m hugging the Birmingham Five. The guy next to me is throwing lager everywhere. And immediately I think we’re going to win the World Cup.

I hug my son, kiss the top of his head, and walk outside.

The coked up lad from Birmingham is waiting for us. He wants to fight the Welsh. He motions to us to wait. We walk on.

“What was that all about, Dad?” Asks my boy.

England plays Sweden in Samara on Saturday after Janne Andersson’s team beat Switzerland 1-0 in the other Round of 16 match on this side of the draw.

The winners will face Croatia v Russia in the semi-final, meaning England, Sweden, Russia or Croatia will be in the World Cup Final.

I walk in the house.

My boy goes to bed.

I look at my wife and begin to explain that England is about to win the World Cup, and how, if that happens, it would likely be the most important day of my life.

“Did you have a good night?” She asks.

I think about explaining it all, my heart still pounding.