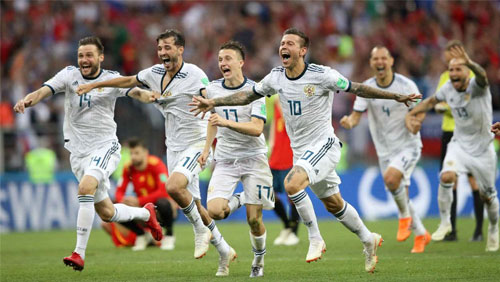 Another round-up from the 2018 World Cup in Russia as the hosts eliminate Spain, and Croatia squeezes past Denmark, both on penalty shootouts.

I’ve had enough of penalties.

Before Mexico and Brazil kicked-off, a quick glance at the stats shows we’ve had a record 27 of the things in Russia.

Controversial, but you have to say, it’s dragging up the goal count.

But VAR doesn’t wear a cape for all teams.

The Spaniards faced Russia as the big favourites to go through to the quarter-finals. The 2010 champions versus the lowest ranked side in the entire competition.

The Luzhniki Stadium in Moscow was bouncing.

It’s a shame the energy didn’t make it to the pitch.

The game began brightly. Barely ten minutes had passed before Sergio Ramos applied enough pressure at the back post to force Sergei Ignashevich to put the ball into his own net. And you expected the floodgates to open so the Spanish Armada could shoot the shit out anything of Russian ilk.

Russia had a very specific gameplan – to win on penalties. So when they equalised, courtesy of, yes, you’ve guessed it, a penalty, a massive bus parked up outside of the Russian penalty area.

Spain dominated the ball to a ridiculous degree. All told, the Spaniards had 1,006 passes, 21 fewer that Russia’s entire campaign. But they offered nothing up front, and not even a late appearance from Andrés Iniesta (strangely dropped from the starting lineup) could make a difference.

The second half was abysmal.

Extra time was even worse.

Koke and Iago Aspas saw their efforts saved by the Russian captain, Igor Akinfeev, and we had the shock of the tournament.

“We were hoping for penalties,” said Akinfeev after the game, celebrating his 111th cap.

I don’t think he would have played in one more comfortable.

And if you thought Spain v Russia was terrible, Croatia’s performance against Denmark was arthritic. I’m struggling with hayfever at the moment. I’m blowing my nose every ten minutes, and the head rush I receive is more satisfying than that 120+ minutes.

It was always going to be tight. Neither team had conceded a goal from open play during the group phase. But with Croatia whipping the arse of Argentina, at the very least you expected Luka Modric and the lads to turn it on even if Denmark couldn’t.

And it began brightly.

Martin Jorgensen put the Danes ahead in the first minute, after a goalmouth scramble, and Mario Mandzukic equalised four minutes later with another scruffy goal.

The only moment of magic arrived three minutes before time when Modric threaded a ball through the eye of a needle only for a Danish defender to bring down Ante Rebic in the area when a goal seemed inevitable. Up stepped the usually calm and assured Real Madrid man, but Kaspar Schmeichel saved, and the two teams headed to extra time.

The two keepers dominated the penalty shootout. Schmeichel saved twice in a man of the match performance, but his opposite number, Daniel Subasic saved three in a lowly looking 3-2 win with Ivan Rakitic ending the action with the final goal.

Croatia reaches the Quarter Finals for the first time since France 98.