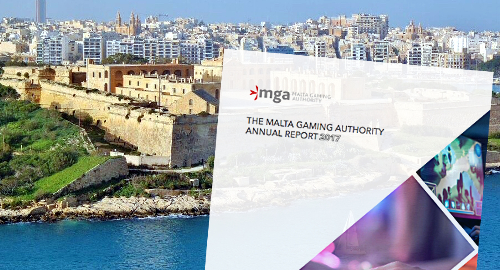 Malta’s gambling sector contributed over €1.1b to the local economy in 2017, according to its gambling regulator’s annual report.

Gaming accounted for 11.3% of Malta’s overall economy, the fourth-highest producing sector. The MGA expects this figure to increase due to its licensees projecting their local expenditure to increase by 8% to 13% per annum over the next two years, while local employment is expected to rise 10%.

The MGA received 220 remote gaming license applications last year, of which 21 were for the new skill-based games licenses. The MGA issued 165 remote licenses last year, up sharply from the 91 licenses issued in 2016. Five licenses were suspended due to regulatory matters, while voluntary terminations were flat at 38.

The MGA’s annual report was relatively mum about its proposed ‘sandbox test’ of cryptocurrency and distributed ledger technology (DLT), which was supposed to commence in Q2 and proceed for a six-month duration.

The MGA’s report said only that it will “during 2018, be issuing a set of criteria for public consultation, for the establishment of a sandboxed (test and learn) live environment for cryptocurrency adoption within the online gaming sector, whilst also drafting guiding principles for the application of DLT and its various adaptations within the industry.”

Speaking of delays, the MGA announced last week that the implantation of its new regulatory framework had been pushed back one month to August 1. The delay followed a European Union member state issuing a detailed opinion on the MGA’s draft Gaming Authorizations Regulations, prompting the extension of the standstill period until July 16.

The primary changes in the new regulatory rules include replacing the current multi-license system with broader B2B and B2C license categories that cover different activities across multiple distribution channels. The MGA is also granting itself broader authority over compliance and enforcement functions, particularly in the realm of anti-money laundering activity.