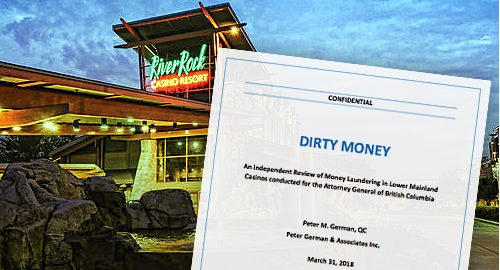 A truly independent gambling regulator is necessary if the Canadian province of British Columbia wants to rein in casino money laundering, according to a blistering new government report.

German has harsh words for the province’s former Liberal government, which ceded power last year to the new NDP administration, who learned that the Liberals had been actively hiding the scale of the problem. German said the failure to reduce the mind-boggling scale of casino shenanigans was “not of one entity or person, but of the system.” As German acidly notes, “nobody said no.”

German’s principle recommendation is that the British Columbia Lottery Corporation be stripped of its regulatory duties, to be replaced by a new independent gaming regulator with a degree of independence from the government.

That’s a far cry from the current “dysfunctional” system, in which one branch of the government oversees gambling activity while another branch allegedly cracks the whip on regulatory antics, despite gaming representing the government’s single largest revenue source besides taxes.

This website and its founder have long argued that government-controlled gaming operations like Canada’s provincial gambling monopolies are effectively subject to less regulatory scrutiny than the internationally licensed online gambling operators that these same monopolies falsely claim lack responsible oversight.

German also recommended that local police establish a dedicated gaming industry unit with a focus on the province’s lower mainland, where most of its casinos are located, including the River Rock Casino, the site of some of the most egregious money laundering allegations.

In addition to the tsunami of questionable Chinese money that washed up on the shores of BC casinos, German’s report indicates that Mexican drug cartels and Middle East organized crime groups also used what became known around the world as ‘the Vancouver model’ to launder the proceeds of their illegal activity.

BC has already implemented some of German’s recommendations, including new anti-money laundering rules that have already led to a significant reduction in cash transactions of the sort that made global headlines over the past year. Further curbs, including capping wagering limits, are also in the works.